An aggressive persona one might assume when in competition 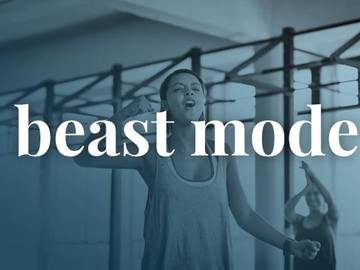 What does beast mode mean?

Beast mode refers to the aggressive, animalistic persona that one might assume when in competition or combat in order to overpower an opponent.

Where did beast mode come from?

The term alludes to a trope in video games in which a character “powers up” into a stronger, superhuman form that allows them to fight (often after collecting a special token or eating a particular food). The New Republic attributes the phrase to Altered Beast, a game manufactured by Sega in the late 1980s.

“Beast Mode” also became a nickname in the 2010s for NFL running back Marshawn Lynch, due to his ability to power past blockers.

How is beast mode used?

Patrick’s ongoing Instagram documentary of her workout habits is no secret. But she recently has ramped up the intensity, as evidenced by a pair of videos showcasing the racing superstar’s beast-mode mentality in her home gym.
— Dakota Randall, NESN.com, 31 Mar. 2018

If anyone was confused what exactly beast mode meant here you go @MoneyLynch https://t.co/GINOZjQqyl