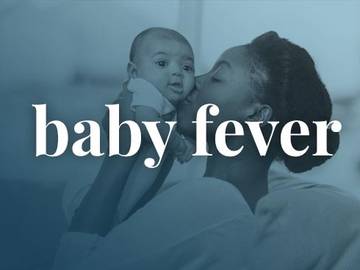 What does baby fever mean?

Baby fever is the name for the longing that some people experience relating to the desire of having a child (or grandchild) of their own. It tends to primarily affect childless adults who are of parenting age after they encounter a baby and especially when they hold him or her in their arms; however, people who already have children are not immune:

Khloe [Kardashian] joked when asked if she has baby fever. "I honestly think I would love to have more kids, but I think I just don't know if I'm ready to get pregnant again, it's a lot!"
— Jess Cohen, Eonline.com, 3 Aug. 2018

Where did baby fever come from?

The parentage of the word baby is uncertain. The word is related to babe, but babe has no official birth record. The origin of fever is also obscure, but we can tell you that it developed a non-pathological sense in the 16th century that refers to a heightened or intense enthusiasm for something or someone. The coupling of the two words seems to have occurred in the early 1980s. If that's the case, the popularity of the 1977 film Saturday Night Fever may have contributed to the extended use of fever.

People stricken with severe baby fever have also reported psychosomatic symptoms, such as experiencing feverish dreams about being pregnant and caring for a child, feeling restless from the unfulfilled wish, and experiencing a visceral radiating pain—all of which cannot be satisfactorily dismissed by the evolutionary argument that people desire to have children to pass on their genes or to perpetuate the species. Rather, such phenomenon suggests that there is an innate inclination in some people to have children, and the unofficial term for that inclination is baby fever. Joan Didion in her 2011 memoir Blue Nights exemplifies the condition:

Some of us feel this overpowering need for a child and some of us don't. It had come over me quite suddenly, in my mid-twenties, when I was working for Vogue, a tidal surge. Once this surge hit I saw babies wherever I went. I followed their carriages in the street. I cut their pictures from magazines and tacked them on to the wall next to my bed. I put myself to sleep by imagining them: imagining holding them, imagining the down on their heads, imagining the soft spots at their temples, imagining the way their eyes dilated when you looked at them.

How is baby fever used?

😭 i rebuke this in the name of Jesus. Baby fever BE GONE https://t.co/gq8QY9HCUx

Editor's Note: To those in a relationship who find their significant other is becoming obsessed with everything "baby," we would like to warn you of the onset of baby fever, but we know it's very contagious and affects people instantaneously—so, congratulations, you're going to make a great parent. We could mention the sleeplessness and diaper blowouts and spit-up that occurs during the early stages of child-rearing, but we know it won't make a difference to the affected.