The waste produced by the rich 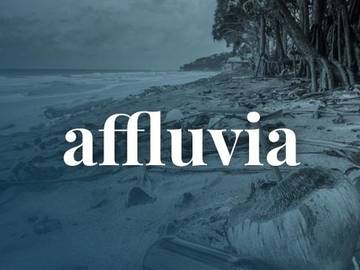 Affluvia is a combination of affluent and effluvia, referring to the waste produced by the rich.

Where did affluvia come from?

Effluvium is a technical word for “waste” or “waste product.” It comes from the Latin word for “flowing,” and often means “an invisible emanation” such as an offensive exhalation or smell. The related word effluent can mean “flowing out” or “waste material,” and is a cousin of affluent, meaning “wealthy.” They are both formed from the Latin verb fluere meaning “to flow.” Effluent comes from combining ex- with fluere (“flowing from”) and affluent comes from combing ad- with fluere (“flowing toward”).

The plural of effluvium is effluvia, which is used in contexts like these:

For the last few weeks we in Ben Rhydding have been inhaling a noxious effluvia arising from an open drain, which has had a most deleterious effect upon the health of visitors and residents alike.
—Ilkley Gazette (UK), 26 September 1893

The close relationship between the related words effluent and affluent allows for a bit of wordplay at the expense of the wealthy with the coinage of affluvia, meaning either “the waste produced by the rich,” or “wasteful wealthy people,” as in this example:

Gone are the "affluvia", those charter-jet-flying, Aspen-skiing, 911 GT2 driving, bespoke-Birkin clutching creatures of the credit boom. Even masstige is threatened. In their place is "enoughism" aspractised by the "frugalista".
—Andrew Cornell, Australian Financial Review, 6 February 2009

Only time will tell if this word catches on, but it has the advantage of etymological logic. One potential problem with widespread acceptance is confusion: effluvia is spelled affluvia in many texts.