An eighth of an ounce of cocaine or some other drug 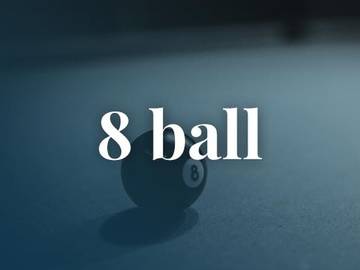 What does 8 ball mean?

An 8 ball (also commonly called eight ball) is approximately an eighth of an ounce (ranging from 3 to 3.5 grams) of an illegal drug, most often cocaine.

Where did 8 ball come from?

The term appears to have originated in the mid-1980s, at least in print, and, as the citations below indicate, the going rate for such an item at that time ranged from $300 to $350.

The suspect demanded an "eight ball" of heroin, money, and the keys to a truck, said Henry, who doesn't own a truck.
— Arizona Republic (Phoenix, AZ), 18 May 1993