What Are 'Practical Effects'?

Or, How Star Wars Was Made

Lots of people are talking about the new Star Wars film — and it seems that most fans are looking forward to a return to the familiar things they loved about the original trilogy: the music, the droids, the cast, the screenwriter, and the practical effects. 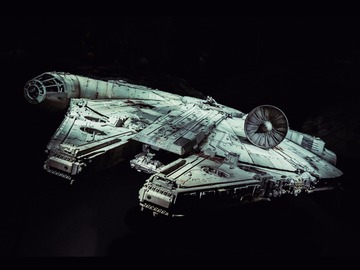 Practical effects are visual effects used in filmmaking created by the use of three-dimensional models or figures. They are recorded by a camera rather than created by software — as opposed to computer generated imagery (CGI).Films released in the '70s and '80s used special effects as proud badges of cutting-edge cinema, but by the mid-90s audiences began to take notice of too much CGI, which can look unreal and cartoonish on high-def screens. With practical effects, things look real because, at least in the three-dimensional sense, they are real.

The original Star Wars films were made before CGI technology, so Luke's landspeeder, the Death Star, and the Millennium Falcon were all filmed. Going back to those techniques is a bit retro, and we might call practical effects a retronym, like acoustic guitar or snail mail or conventional warfare. These are terms that need modifiers to make what had been their original meaning explicit.

After all, Star Wars takes place "A long time ago..."