It's not just about pranks anymore.

Sometimes when a word decides that it has been stuck in a rut and wants to change its meaning it will do so gracefully, through a series of small changes. And then there are words like spitball, which drop in and leave you staring. 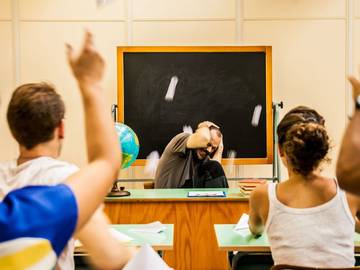 No one ever said being a substitute teacher was easy.

The earliest uses of the word have been largely overlooked. On June 30th, 1794, Isaac Bull, a shopkeeper in Hartford Connecticut, placed an ad in a local newspaper for many items that one might well expect to find in late 18th century New England: writing paper, coffee, ginger, needles, quills, and the like. He also advertised that he was selling a spit ball.

Based on mentions of this item in the following decade it appears to have been something used for the blacking of shoes, not classroom pranks. Sales must have been slow, as you are unlikely to find it recorded in any current (or obsolete) dictionary of English.

By the 1830s the modern spitball had arrived, and was being used to describe one of the many annoying things that schoolchildren do. The spitball was typically fashioned out of paper, although in a pinch, other substances (such as bread) would suffice.

And now, we say, we want five new, handsome and commodious schoolhouses … so that the children may learn something wherever they turn their eyes … and not covered as they are now, with the first engines of war, which the little urchins manufacture from the spare leaves of their books, in other words, spit-balls, daubs of ink, and even obscene writing, and representations that would make a parent of any sensibility shudder at the thought of sending a child to such a place.
— The Common School Journal (Boston, MA), 15 Jun. 1839

A Sabbath or two before, at their communion, the boys and girls, taking the bread as it was passed to them, converted it into spit-balls, and passed their time very much to their edification in throwing them at each other across the church.
— Matthew Hale Smith, Text-book of Universalism, 1845

Spitball was occasionally used in a figurative manner, but largely remained in the classification of “paper chewed and rolled into a ball to be thrown or shot as a missile,” until the beginning of the 20th century, when pitchers discovered that adding a little of their saliva to a baseball would cause it to behave in an unpredictable fashion.

It acts similar in many respects to the best “drop” ball used by the leading boxmen of the American and National legues, but is more deceptive. It is called the “spit-ball” from the fact that the pitcher moistens his pitching forefinger just before delivering the ball.
— The Nashville American (Nashville, TN), 27 Oct. 1903

Although it entered the parlance of baseball as a noun, it did not take long for spitball to begin being employed as a verb.

Within a week Ewing had spit balled himself into a position in the hearts if his fellow townsmen calculated to make the most popular politician in Redtown green with envy.
— The Inter Ocean (Chicago, IL), 20 Apr. 1905

For the first half of the 20th century spitball was a word with a fairly dependable range of meanings: it referred to a ball, and spit was involved. And then, all of a sudden, the word took a sharp left turn, and added a new meaning which bears little resemblance to its constituent parts.

This new sense of spitball might be defined as “to suggest ideas, especially those that are jocular, improbable, or impractical,” and it’s not really as new as you would think.

In the ad agencies along Manhattan’s Madison Avenue and Chicago’s Michigan Boulevard the true test of a huckster’s sincerity is the way he speaks the language. But it is not the English language as most people know it: it is the adman’s jargon….At such high-level “spitballing sessions” it may be advisable to “pitch up a few mashie shots to see how close we are to the green.”
— Management Review (Saranac Lake, NY), 1 Oct. 1952

But this highfalutin talk is commonplace in the hyperthyroid world of Advertising Row where one no longer “thinks out loud”—he “flies blind for a minute here, just spitballing, so to speak.”
— William Morris, _Reno Gazette-Journal (Reno, NV), 15 Dec. 1953

The modernist sense of spitball has often been assumed to have come from the jargon of advertising, which is a distinct possibility but unconfirmed. It is similarly unclear how this new sense came about; is it a reference to the unpredictability of the pitcher’s spitball, or does the expostulation of ideas mimic the shooting out of a child’s spitball?

The only thing of which we are certain here is that the “ideas” sense of spitball has shown sufficient breadth of use and tenacity that it will stick around for some time. As for the origins of this sense, you may spitball amongst yourselves.