Rogue, a word that has been used to refer to any one of a number of types of human scoundrels since the 15th century, has been having a greatly increased amount of use in recent years. This is not because of any renewed interest in finding a good synonym for ne’er-do-well or rapscallion, but rather because the phrase going rogue—exhibiting maverick-like behavior, or bucking the status quo—has been given new life as a political byword. The phrase has seen one of its shades of meaning become considerably more common, thanks in large part to associations with the former governor of Alaska, Sarah Palin, whose 2009 memoir was titled Going Rogue: An American Life. 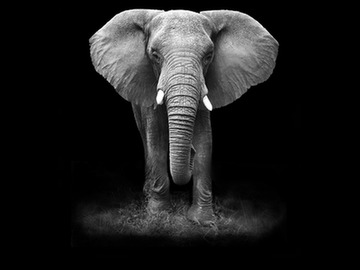 The earliest known citations for "going rogue" all dealt with elephants—appropriately enough for a phrase now commonly used in reference to the Republican Party.

What is going rogue, and when did we start using the expression?

The earliest known citations for going rogue all dealt with elephants—appropriately enough for an expression that is now frequently used in reference to the Republican Party (often symbolized by an elephant).

There is always a reason why these giant pachyderms go rogue, and here in this report we seemed to be able to define this one clearly: if then the tusk were actually growing into the flesh of the cheek or jaw, we must keep a guard day and night, for as the pain grew worse he would become the killer, taking everything before him in wild stampedes. (Dallas Morning News, May 17, 1931)

Rogue, by itself, has been used to refer to an elephant that has become violent (either from being separated from their herd, or because they have been injured) since at least 1835. When going rogue was first used it had a fairly specific meaning of ‘behaving in an erratic or dangerous fashion.’

The expression today is more likely to be used to indicate that someone is displaying some degree of independence or failing to follow an expected script. And it need not be applied only to elephants (either real or symbolic ones).