The Joy of Reduplicative Rhyming Words 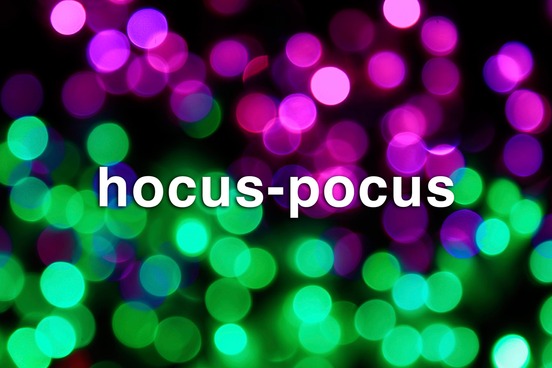 : nonsense or sham used or intended to cloak deception

Hocus-pocus has had a number of meanings over the years. It began, in the early 17th century, as a term for a juggler (and the etymology is thought to be the jugglers' attempt to imitate a Latin word). After this it became a phrase employed by the jugglers, used as a faux incantation when performing a trick.

From there it became synonymous with nonsense used to mask a deception. Like many other reduplicative words hocus-pocus has a good number of similar synonyms (reduplicative words like to stick together); mumbo jumbo ("complicated and sometimes purposeless activity intended to obscure and confuse") and fiddle-faddle ("trifling or foolish talk, comment, or action"). 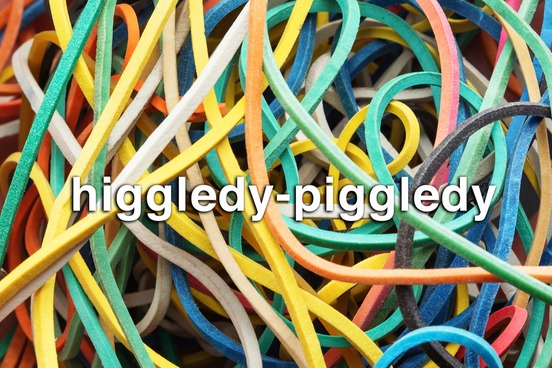 Higgledy-piggledy is one of our older reduplicative expressions, dating back to the end of the 16th century, when it appeared in John Florio's Italian/English dictionary, A Worlde of Wordes. Higgledy-piggledy is offered as part of a definition of the Italian word tarabara, which reads in full as follows: "higledi-pigledie, helter-skelter, cricket a wicket."

It seems somewhat sad that most lexicographers no longer provide entire definitions made up of rhyming phrases, and also that the lovely cricket a wicket has fallen out of use.

"The maid is the mistress, the master's the man, for higgledy-piggledy now is the plan." - Mr. Pratt, Harvest-Home, 1805 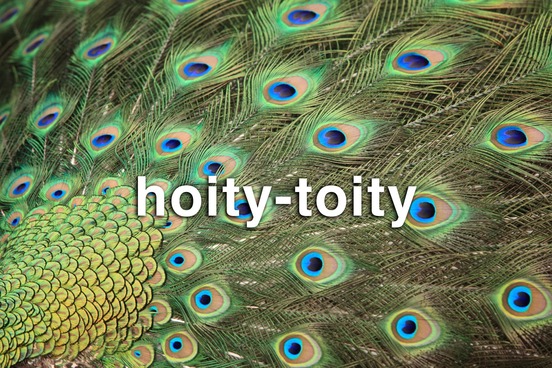 Hoity-toity is today used almost exclusively as an adjective, to describe a person who's got their nose stuck up in the air, but it was used solely as a noun for over a hundred years before taking on adjectivehood. It is a reduplication of the older English verb hoit, a word for which the Oxford English Dictionary provides the splendid definition of "to romp inelegantly" (and I am sorry to report that that dictionary appears to have no words which are defined as "to romp elegantly").

"What bold talk is this? You instruct me? You hoity-toity miss! You babbling baby - rattle-pated doll! I doubt if you know anything at all!" - Carolyn Wells, Ladies Home Journal, May 1921 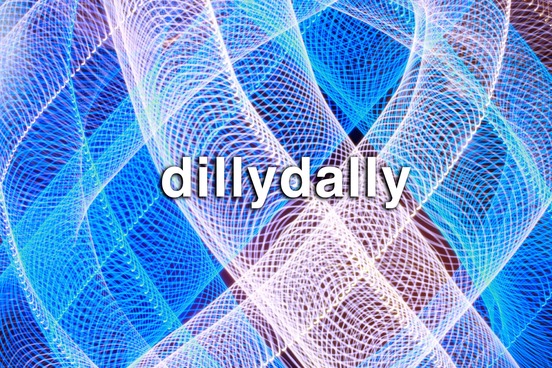 : to act with unusual or improper slowness : to waste time by loitering or delay

Dillydallying is very similar to shilly-shallying, and the latter can be used to mean wasting time as well. But shilly-shally also has the meaning of being indecisive, or showing a lack of resolution.

"Because you don't dilly-dally, because you don't hang on to your wife's petticoats. Service before all!" - Leo Tolstoy, War and Peace (trans. by Nathan Haskell Dole), 1889 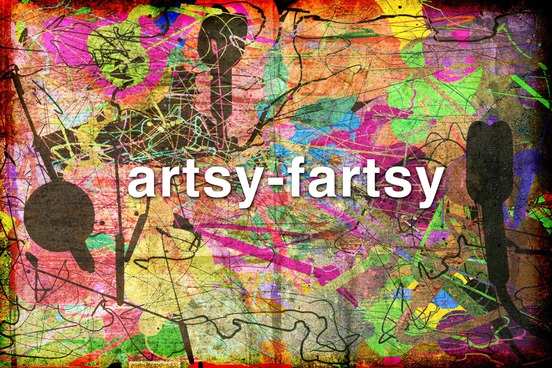 One of the interesting things about reduplicative phrases in English is that they appear with regularity throughout the ages, and are not restricted to any one period of language. We've been coming up with silly-sounding rhymes for hundreds of years now, and show no signs of getting tired of them, as artsy-fartsy (which begins to appear in the early 1960s) shows.

"The pressing question is: What will become of the Bellevilloises - the working-class immigrants - as more artsy-fartsy young French flock to the neighborhood?” - Jody Rosen, The New York Times, 20 May 2007 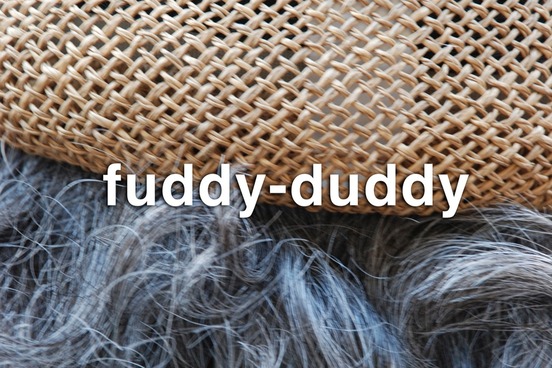 : one who is old-fashioned or ultraconservative

Fuddy-duddy can refer either to a person who is old-fashioned, one who is pompous, or one who is concerned overmuch with trifles. No one is entirely certain where it came from, although there is speculation that it is from the Scots word fuddy ("the tail of an animal").

"Smitherson, what can you find to like about Blayne? Of all the narrow, unenterprising, fuddy-duddies he takes the cake! Doesn't seem to be an ounce of red blood in him!" - Arthur Chamberlain, The National Magazine, January 1897 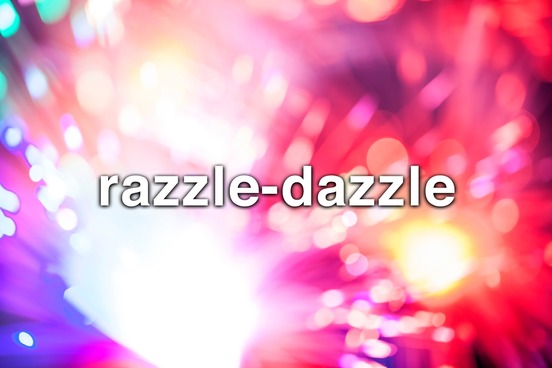 : complex maneuvers (as in a competitive sport) designed to confuse the opponent

Before razzle-dazzle was the term du jour to refer to showboating in sports, it referred to a state of confusion (and also occasionally to something, such as a type of fast-moving carousel, that was designed to induce confusion).

But we've enough reduplicative words for confusion, what with all the pell-mell, helter-skelter, hugger-mugger, and general topsy-turviness, so it's fine if razzle-dazzle decided to move to a less crowded portion of the semantic field.

"It is too often the case that 'guzzle-guzzle' is taken for 'razzle-dazzle.' This is a slight mistake that should be steered clear of." - Trenton Evening Times, 24 November 1888 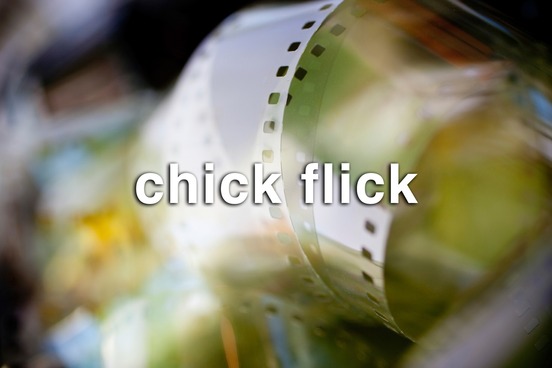 : a motion picture intended to appeal especially to women

Random, obscure baseball trivia: Chick Flick was the name of a manager of Rustic Tavern, a semi-professional team in Indiana in the 1940s and 1950s. It would be rather lovely if somehow the modern term for the ostensibly feminine movie came from this man’s name, but that is not the case.

Chick flick differs from many of the other words on this list in that each of its parts is itself a regularized (albeit shortened and somewhat non-standard) word in English: chick is a colloquial term for a young woman (taken ultimately from chicken); flick is from flicker (an early slang word for a movie).

"It would be several years of walk-ons and bit parts in films like Russ Meyer's Beyond the Valley of the Dolls (1970) and Twilight People (1972), which the critics said could put insomniacs to sleep, before Grier would land a starring role in Corman's Black Mama, White Mama (1972), another chick-flick set in a slammer in the Philippines." - Michael Matza, The Philadelphia Inquirer, 25 August 1988 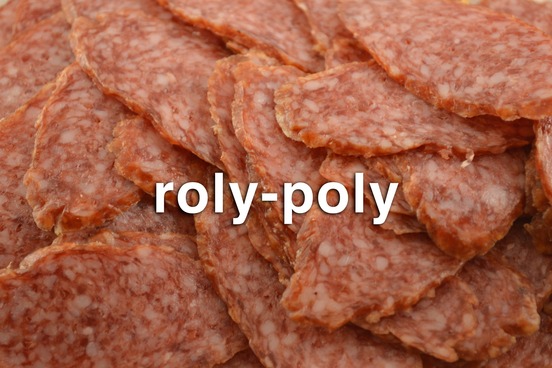 : short and pudgy in stature

There are a lot more words in English for people who have too much weight than there are for those who have not enough. The list of synonyms for skinny is dwarfed by the list of its antonyms. Consider that for most of the history of the English-speaking people we have had more skinny people than overweight ones, and this imbalance appears to be a reflection of the language's use for cruelty.

So add roly-poly to the list of words you don't really need to use, along with squdgy, spuddy, chuffy, fozy, pursy, upholstered, and several dozen others.

"A little fat roly-poly fellow essayed the character of 'Hamlet' in Chicago last week. Frank Lincoln who saw him said that between fat Hamlets and ham fatlets Chicago playgoers are made pretty tired." - The New York Tribune, 30 April 1888 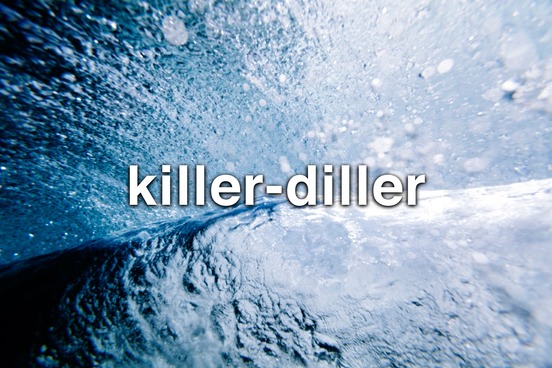 : something highly and usually factitiously sensational of its kind

Compilers of dictionaries generally follow a set of rules when crafting their definitions.

One of these is that the definition should have no words or terms in it that are more difficult to understand than the word that is being defined. Every once in a while one will slip through, as may be seen in the above definition for killer-diller from the Merriam-Webster Unabridged dictionary. However, in this case, the phrase in question ("factitiously sensational") has such a pleasing ring to it that it may be excused.

Killer-diller comes from duplication of the slang term killer, which, in addition to referring to a person who kills things, has served to denote something that is spectacular.

"It seems Ralph is the steady type and Randy is the killer-diller with the ladies. Both are fliers - and buddies." - S. R. Mook, Silver Screen, August 1939 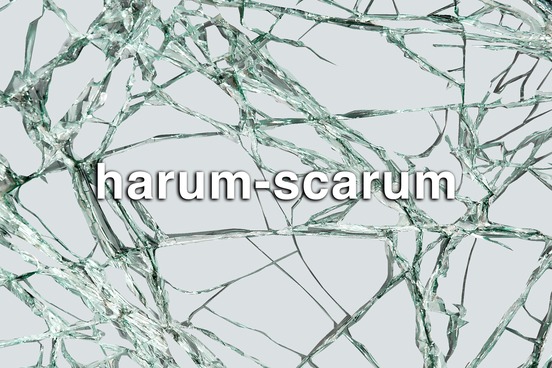 : in a rash or heedless way: recklessly

Harum-scarum dates from the end of the 17th century, and is thought to possibly be an alteration of our old friend helter-skelter. The word with the -rum ending seems to have not struck quite the same chord as the one ending with -elter. Helter-skelter has been thoroughly interwoven in our culture, lending itself to the title of at least one very popular song (by the Beatles), a number of books (including several about the Manson murders), and a handful of movies.

Harum-scarum, on the other hand, can boast of a single movie title to its credit: a 1965 vehicle for Elvis Presley which is described by IMDb.com in the following manner: "American singer Johnny Tyrone is enlisted by sinister forces to assassinate an Arab king whose daughter he has fallen in love with."

"Upon the whole, sir, it is a pestilential topsey-turvey, harum scarum whirligig." - Newbern Spectator, 24 July 1830