The loose skin at the joint of one's elbow 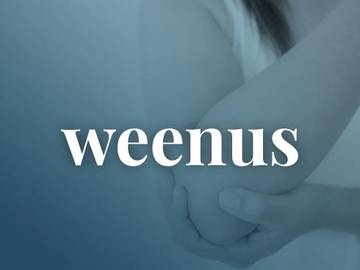 The material contained in this article is meant for mature readers who have an interest in slang and who have a sense of humor about anatomical parts. With that disclaimer stated: both weenus and wagina are used humorously and developed from childish associations of male and female anatomical parts and their respective formal names with the elbow joint. (Sure, they're childish—but we get them, and we will try to explain the rationale behind the coinages in a mature way.)

Weenus (or weenis or wenis) is a slang word for the excess or loose skin at the joint of one's elbow, which is technically referred to as olecranal skin. Olecranal is an adjective used in medicine that means "of, belonging to, or relating to the olecranon." The olecranon is the process of the ulna (one of the bones in the forearm) projecting behind the elbow joint.

Where did weenus come from?

Being a slang term most often used in social media, it is difficult to determine exactly when weenus was first used or how it developed. However, online evidence does suggest that it was probably coined in the late 20th century, and by the early 21st century, the word gained widespread circulation. Etymologically, it seems likely weenus is a play on the medical term penis and its slang variant wiener. The "u" spelling may have been influenced by a 1995 episode of the popular television comedy Friends during which the character Chandler Bing has to explain that the humorous-sounding acronym WENUS represents "Weekly Estimated Net Usage Systems." This is only lexical conjecture; however, the pronunciation of the acronym is an obvious play on the male member. Apparently, the writers for the Hangover movie franchise also had fun with weenis:

The "weenis" is a flap of loose skin on the back of the elbow. Many people seem to enjoy talking about their weenis, how it looks and how it feels. It’s become a popular trivia question and joke punchline. The description was popularized in the movie The Hangover, when Alan, the strange member of the Wolfpack, exclaimed, "When a monkey nibbles on a weenis, it's funny in any language." The word has spawned countless T-shirts, mugs and posters featuring phrases like, "Your weenis is showing!"
— The Toronto Star, 24 Jul. 2012

Wagina also began circulating the internet in the aughts, and it is used for the skin opposite, or above, the weenis. Specifically, it refers to the skin in the pit between your forearm and upper arm, and, it seems, when the forearm is raised to the upper arm, the name is based on vagina (although the external parts of the female sexual organ are properly referred to as the vulva). Technically, you can refer to the area as the antecubital fossa. Antecubital is an adjective meaning "of or relating to the inner or front surface of the forearm" (in Latin ante means "before" and cubitum means "elbow"). Fossa is a Medieval Latin borrowing that is used for an anatomical pit, groove, or depression.

Sorry for sharing this. You'll probably never view the elbow the same.