We're putting on a big show about it

The tail wagging the dog is an idiom that usually refers to something important or powerful being controlled by something less so. Its earliest use is in the 1858 play Our American Cousin. The 1997 film Wag the Dog shortened the phrase and added the additional meaning of "superfluous (military) action in order to distract from domestic scandal." 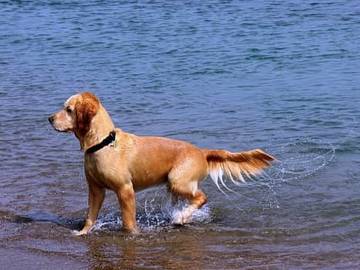 Who's a good idiom?

Sometimes words or phrases come into English from the world of film, as in paparazzi (the plural form of a word for a type of freelance photographer) taken from the name of a character in Fellini’s 1959 film La dolce vita. Others have come from the world of theater, such as malapropism (“a usually humorous misapplication of a word or phrase”), from the name of a character in Richard Sheridan’s 1775 play The Rivals. And others still appear to have come from both media. An example of this is the idiom the tail wagging the dog.

We define this phrase “used to describe a situation in which an important or powerful person, organization, etc., is being controlled by someone or something that is much less important or powerful.” As noted by linguist Ben Zimmer, the phrase originated in Tom Taylor's 1858 play Our American Cousin. Lord Dundreary, a fictional British nobleman, makes a number of execrable jokes in this play.

Dun Now I’ve got another. Why does a dog waggle his tail?
Flo Upon my word, I never inquired.
Dun Because the tail can’t waggle the dog. Ha! Ha!
— Tom Taylor, Our American Cousin, 1869

The joke quickly became part of our vernacular, although the theatrical origins were often omitted (the line was sometimes attributed to a real, rather than fictional, lord). It did not take long for the form to change slightly, and wag was substituted for waggle.

The answer to a riddle, “Why does a dog wag his tail?” is answered by an English nobleman, who says it is “because the dog is stronger than his tail. If he wasn’t the tail would wag the dog.” Sharp reasoning, that.
— The Union Democrat (Manchester, NH), 12 May 1863

”Why,” says his lordship, “the reason is because the dog is greater than the tail.” “If it were otherwise,” says that profound thinker, ”the tail would wag the dog.” [Laughter.] Here was an instance, Mr. Speaker, where the smallest kind of a rat terrier’s tail attempts to wag a New Foundland dog. [Laughter]
— The Baltimore Sun, 4 May 1868

The idiom appears in a variety of forms over the next hundred years or so, typically in the sense of ‘a less important thing controlling a more important one.’

Ordinarily the resolution is of more importance than the preamble, but here the relation is reversed. It is a new version of Dundreary’s conundrum, a clear case of the tail wagging the dog, because it is stronger than the dog.
— The Detroit Free Press, 5 Apr. 1874

There was no compromise promised and no alteration of the tactics the Communists have adopted from the first of reserving the right of the tail to wag the dog.
— P. J. Philip, The New York Times, 7 Dec. 1936

A 1997 film, directed by Barry Levinson, brought about a shortened version of the idiom, and added a new meaning. In the film, titled Wag the Dog, fictional political fixers orchestrate the invasion of a country in order to distract from a presidential sex scandal. As the movie was released shortly before President Clinton was embroiled in a real-life sex scandal, the title began being used in an attributive fashion, applied to military actions.

Rep. Dan Burton, R-Ind., a staunch critic of Clinton, said of Thursday's military strikes: "I'd hate to think this was a Wag the Dog-type thing. But even if it was - and I'm not saying it was - it was the right thing to do.”
— Indianapolis Star, 21 Aug. 1998

Although wag the dog was initially applied to Clinton, the sense of ‘superfluous military action to distract from domestic scandal’ has been too useful to leave in the 1990s, and has been applied to every subsequent president.

Since the election split the country in two, half almost automatically disagreeing with whatever Bush decides, most of his quick actions have drawn much criticism. I, along with many political experts, believe that this action by Bush was a classic case of "wag the dog" syndrome.
— Pantagraph (Bloomington, IL), 2 Mar. 2001

The Obama team was focusing on the kidnapped Nigerian girls in order to divert attention from the congressional probe, West wrote. “Are we witnessing an Obama ‘Wag the Dog’ moment with Boko Haram in Nigeria? I say yes.”
— Michael Hirsch, Politico, 12 May 2014

U.S. Ambassador Nikki Haley's recent warning to the United Nations Security Council that civil unrest in Nicaragua poses a threat to the stability of Central America may have set the stage for Donald Trump's "Wag the Dog" moment.
— The Jackson Sun (Jackson, TN), 13 Sept. 2018

It is uncertain whether the longer or the shorter form of the idiom will supplant the other, or if both will end up in use with their individual senses. Given that we’ve already gotten two distinct meanings from theater and film, it’s also possible that some future use of the phrase will be added by a music video or puppet show.