Be the star of your own movie.

What Does 'Velfie' Mean?

Velfie: A video taken of oneself. (A combination of "video" and "selfie.") 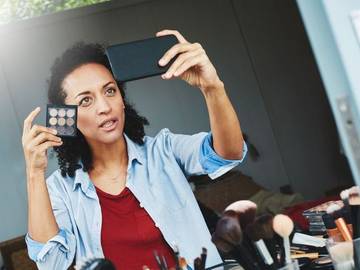 Makes a lot of sense, really.

We’re all familiar with the selfie. So it shouldn’t come as a surprise that a new way to show yourself online has taken hold—the velfie.

People filed into chairs in front of a screen; on each seat was a brochure listing ten tips for festival coverage. ("1. Give followers an all-access pass"; "4. But first, velfie.") Two Instagram staffers, Elisa Benson, wearing all denim, and CJ Hernandez, in all black, stood at a lectern. "Remember that the vast majority of people who are following your coverage at Coachella are not actually at Coachella," Hernandez said. "Show them how the sausage gets made."
— Sheila Marikar, The New Yorker, 29 Apr. 2019

"We were seeing a lot of apps that were trying to riff off the 'velfie' (video selfie) concept but it seemed like they were all a little bit backward, literally," says David Leiberman, one of the app's [Triller] co-creators. "The video was coming first and then you would sort of layer audio on top of it. We thought, if you reversed it, much like music video directors do when they're deciding how to shoot a video, you could choose a song and layer different video takes on top of it."
— Karissa Bell, Mashable, 23 July 2015

The Origins of 'Velfie'

Velfie is an obvious portmanteau of video and selfie, the term for the picture one takes of oneself that became ubiquitous with the popularity of smartphones. (Selfie was entered in the Merriam-Webster.com dictionary in 2014.) Most smartphones also allow for video recording, so taking a video of yourself for upload, rather than a still photo, produces a velfie rather than a selfie.

The v- in video has similarly been deployed as the initial in a number of new coinages as video has been introduced to a technology or concept that already existed. It replaced the b in blog, for example, to make vlog for a blog that emphasizes video material over text. Similarly, it replaced the p in podcast to make vodcast for a podcast in video format. When MTV was introduced in 1981, the term veejay (combining video with deejay, another word for disc jockey) emerged as a logical term for the host of its music-video programming. Many years after MTV stopped being primarily a music-video channel, the term still gets used.

Only time will tell if velfie picks up the same momentum that selfie did to earn entry into the dictionary. If it does, we hope it will be ready for its close-up.