Utmost means “greatest” or “highest,” as in “utmost importance” or “utmost respect.” Upmost is less common synonym of uppermost, meaning “at the top” or “highest in position,” as in “upmost layer.” Though the words are similar and can overlap in meaning, upmost is an error when used to mean “greatest.” Use utmost instead.

Utmost and upmost are words with close spellings and pronunciations. They are also both adjectives with slightly similar meanings, which we will discuss. Given these similarities, the words are occasionally confused in writing and speech. Specifically, upmost is mistakenly used in contexts in which utmost is wanted. This is somewhat understandable—though we don't endorse the misuse—since "up" is a much more common sound picture than "ut." If you have found yourself using "upmost importance" or "upmost respect," this article should be upmost on your "things to do" list. Helping readers differentiate utmost from upmost is our utmost concern. 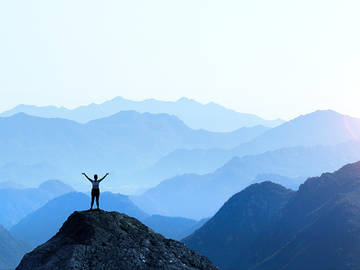 Is this the utmost or the upmost? Keep reading to figure it out.

Utmost communicates that something is of the greatest or highest in degree, number, or amount. In this sense, utmost is commonly found modifying words like importance, concern, and respect, among others.

Apply these chemicals with utmost care, because any herbicide that will kill poison ivy also will kill any other plant it touches.
— Beth Botts, The Chicago Tribune, 16 July 2020

The public can be assured that under her stewardship, the office will be led with the utmost integrity and competence.
— Douglas M. Parker, quoted in The New York Times, 10 July 2020

Utmost also indicates that something is, literally or figuratively, farthest or most distant—or that it is outmost. (Utmost, incidentally, traces back to Old English ūtmest, a superlative adjective formed from the adverb ūt, meaning "out.")

We know that it is a three stage rocket that's capable, maybe, if they have it and if they can make it work, of going possibly very far—the utmost range, we believe, would be as much as 9,000 miles.
— Tom Foreman, quoted on CNN, 15 Dec. 2010

No matter how trained, confident, or practiced a runner is with managing pain, pushing oneself to the utmost limit still hurts—a lot.
— Zach Batt, The DePauw (DePauw University), 2 Oct. 2018

Additionally, utmost is used as a noun to refer to the highest attainable point or degree, as in "The hikers pushed themselves to the utmost to get to camp before dark" or "The inn provides the utmost in comfort and luxury." The noun also often occurs in phrases such as "to do one's utmost" or "to try one's utmost," meaning "to do one's best."

The adjective upmost is a combination of the adverb up with the adjective suffix -most, meaning "most" or "to the greatest or highest degree." It denotes being situated in the highest or most prominent position and is synonymous with uppermost.

It gets no sweeter than a penthouse-type vista, so you can imagine my surprise when I found myself stationed on an upmost floor in a condo-suite, showcasing a 180 degree panorama of the Atlantic.
— Regina Lynch Hudson, The Atlanta Tribune, 1 September 2015

Upmost is thus the correct word for describing things in the highest position where, on the other hand, utmost signifies the greatest degree or amount of something. Upmost is also sometimes applied figuratively to suggest that something is ranked highest especially in the mind.

The safety of the children was upmost in her mind.

The economy remains upmost in the minds of voters.

In its dictionary sense, upmost is infrequently used in current English; uppermost is preferred. But upmost is frequently used as a mistaken spelling of utmost in its adjective and noun forms.

Forest Supervisor Kelly Russell is appreciative that community members and visitors were supportive of the restrictions and did their upmost in preventing human-caused fires.
— The Grant County Beat (Silver City, New Mexico), 10 July 2012

The mix-up of upmost for utmost was part of a 2017 episode of the TV sitcom New Girl. In the show, students of the character Jess give her a gift card (secretly bought by Nick) as a present. One of the students then says that they have the "upmost" respect for her. The use of upmost catches Jess' attention and she calls out Nick. Here's the dialogue that ensues on the two words.

JESS: "Upmost"? There's only one person I know that says "upmost." It's "utmost."
NICK: "Utmost"? "Utmost." Agree to disagree. But the good news is my writer's block is gone, and that is thanks to you. You always come through for me, Jess, to the upmost.
JESS: I assure you, it's "utmost."
NICK: What's an "ut"?
JESS: Come on, you're a writer.
NICK: It's "up." Up to the most. Not ut to the most. I assure you.
JESS: Okay, sweetie.
NICK: You didn't come in here and say, "Thanks for putting them ut to it." I would've laughed you out of here. What is an "ut"?

Uppermost is also a word that has been erroneously used to mean "utmost." This occurrence is seldom, but evidence can be furnished.

Professional child actors will not be asked to appear on Kids Say the Darnest Things. The casting will be across the country (and not just in Los Angeles). And diversity will be of the uppermost importance.
— Marc Berman, Forbes, 5 Aug. 2019

In sum, utmost is the adjective that indicates that something is of the greatest degree, number, or amount or farthest or most distant. Upmost is the adjective for conveying that something is at the highest or in the most prominent position. As its spelling suggests, upmost describes things that are up high. This notion of being the highest may be confused by some with being the greatest, which, in turn, leads to erroneous use of upmost when utmost is called for. Utmost is the correct word in phrases like "utmost importance" or "utmost respect." Utmost concerns degree; upmost concerns position.