There are four distinct words spelled root in the dictionary, beginning with the noun meaning “the anchoring part of a plant” and its related verb meaning “to grow and develop roots.” Another is the verb meaning “to turn up or dig in the earth” or “to poke or dig about.” Finally, root can be used to mean “to cheer” or “to wish the success of something.” Route is a noun meaning “a road or highway” or “a course or line of travel” and a verb meaning “to send or direct to a specific path.” Both of these words can be pronounced either \ROOT\ or \ROWT. There is also the word rout, meaning “defeat,” and is both a noun and verb pronounced \ROWT.

Sports fans have something in common with plants and farm animals—they all "root." Sports fans root for their team (and sometimes remain rooted to their seats in shock after their team just got routed); plants root in soil; pigs root—that is, dig with their snouts—for food (this root is applied to other animals, snouted or snoutless, as well—like chickens).

In the yard below the garden, just outside the palm fence at the back, a score of pigs and chickens rooted and pecked.
— Constance Lindsay Skinner, The Tiger Who Walks Alone, 1927

Uses of the verb root illustrated in the introduction belong to different homographs of the word. Homographs are words that are spelled alike but are different in meaning, derivation, or pronunciation—and generally they have their own entries in standard dictionaries. In addition, root is a homophone of route (which can be pronounced \ROOT\ or \ROWT\). Homophones are words that sound the same but are spelled differently; such being the case, root and route are sometimes confused in writing. There is also the closely spelled rout that is occasionally mixed-up with both root and route. (Rout is also a homophone of route when pronounced as \ROWT\). 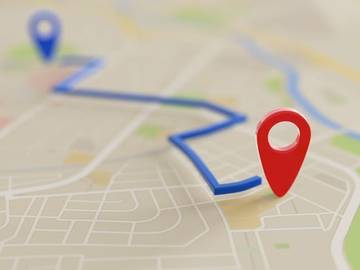 Plot a route to the stadium to root for your team, who we hope does not lose in a rout.

The most logical route to take in explaining the difference in these words is to start with their origins and their basic meanings and provide some examples of usage in order to get familiar with them. We'll then end with an explanation as to why some mix-ups between these words occur along with some examples of them—and a refresher.

The Meanings of 'Root'

Root has four homographs—one noun and three verbs. The noun goes back to Old English in the form rōt with the familiar sense of its modern form root denoting the underground anchoring part of a plant that absorbs water and minerals. The related verb form meaning "to grow and develop roots" (as in "The tree had difficulty rooting in the poor soil") is planted in the 14th century. As both the noun and verb matured, various extended senses influenced by the functions of roots sprang forth from them—for example, "Money is the root of all evil," "a dance rooted in African tradition," "The captain rooted out the mutinous crew members" (which suggests a direct and complete removal as if pulling out by the roots).

In the early 16th century, another verbal root began to be used. It developed as an alteration (perhaps influenced by the noun root) of wroot, from Middle English wroten and Old English wrōtan. Originally, it referred to the pig's act of rooting in search for food. The animal's rooting then became associated with other acts of searching especially those involving poking or digging about, literally and figuratively, as in "Engineers are working at rooting out the cause of the problem."

The exact origin of the fourth homograph—the "cheering" one ("rooting for the underdog," "fans rooting their team on")—is a mystery, but it may be a 19th-century alteration of rout, a British dialectal verb meaning "to low loudly" or "to bellow" (as cattle do, and sometimes fans).

Since the 16th century, rout has shared the "animal" sense of root ("pigs routing in the earth"), and this rout may have begun as a variant. The change in vowel puzzles etymologists, however. A slightly more common meaning of the verb is "to force out as if by digging":

He said his name was Douglas Caddy and he introduced a small, anemic-looking man next to him as the attorney of record, Joseph Rafferty, Jr. Rafferty appeared to have been routed out of bed; he was unshaven and squinted as if the light hurt his eyes.
— Carl Bernstein and Bob Woodward, All the President's Men, 1974

The familiar rout—referring to acts of defeating someone or something (as in "The election was a rout," "The team routed their opponent 10-1")—arrived in English sometime during the late-1500s via Middle French route, meaning "defeat." The French route is possibly from mettre en route, "to set going," "to put into motion."

The Meaning of 'Route'

Route has no connection to either root or rout in meaning or origin—it's from Vulgar Latin rupta, a shortening of rupta via, literally, "broken way, forced passage." As a noun, it refers to ways of getting from one place to another ("a bus/delivery route") or achieving or doing something ("the route to success"), and when used as a verb, it refers to sending someone or something along a particular route ("Traffic was routed around the accident"). No digging or searching is involved.

The most probable root of confusion with route and root is their identical pronunciation as \ROOT\. Another cause is the common association of the homophone root with plants: "What do plants have to do with cheering someone on?" the writer thinks, and then proceeds to write "-u-t-e". Mix-ups between route and rout may also be influenced by pronunciation—they both can be pronounced \ROWT\. The incorrect spelling of route as rout could quite possibly be from a writer's unfamiliarity with its "e" spelling, as well, but it is more likely that it occurs as an oversight. Another factor is that route and rout are spelled the same when inflected in the past tense and the present participle tense; in such cases, you can only differentiate them from context.

People were routed out of their homes by the soldiers.

More and more retailers are routing online orders to brick-and-mortar stores nearby.

But in truth, these are all excuses for the misuse of the words. The key is to become familiar with their spellings and meanings in order to avoid mix-ups such as these:

Once you learn what is at the route of your aspirations to be "better," you can't unlearn it.
— The Republican (Springfield, Massachusetts), 18 July 2019

In Lincoln, one can expect that the game officiating might slant a bit toward the Cornhuskers, given a crowd of 89,853, with few routing for the Buffalos.
— The Denver Post, 22 Sept. 2018

The firefighters had picked him up at his Otis Avenue home, before taking a scenic root to the school. All the school's students and teachers lined the parking lot, waiting for his arrival.
— The Daily News (Batavia, New York), 2 Nov. 2018

Hill said not everyone is prepared to go the traditional rout of a four year college and he wants Soldiers to understand that this program, and the training and skills it provides, gives them an advantage in the workforce they are about to enter.
— The Leesville (Louisiana) Daily Leader, 10 May 2019

If you were already proficient at using root, rout, and route—great! We hope you found some of the etymological and semantic information in this article interesting. If you sometimes stumble in the use of the words, we hope learning more about them was helpful. Here's a refresher. Senses of root stem from the farm: plants growing, pigs digging, and cattle bellowing (that imagery is hard to erase from the mind). Those of rout involve forcing out by defeat or digging. Route is a hard one, but you could connect it with the e in travel.

It is hoped that we have made you more confident in distinguishing the different spellings and meanings of these words. But if you do find yourself hesitating about which to use, look it up in our dictionary.