Is It 'Whet' Or 'Wet' Your Appetite/Whistle?

Whetting your whistle is painful; wetting your appetite is impossible.

Whet your appetite is a phrase meaning to "sharpen one's desire for food" whereas wet your whistle refers to having a drink. Here, whistle is a metaphor for the mouth itself and thus wet is the appropriate word. An appetite, on the other hand, cannot be made physically wet, making whet the correct term.

The verbs wet and whet share an identical pronunciation and, as homophones, have inevitably caused some confusion for writers. Oftentimes, they are mistakenly swapped in the expressions "to wet one's whistle" and "to whet one's appetite."

Examples of the misuse are—unfortunately—fairly easy to find.

With more than 125 restaurants, market-goers can whet their whistle or calm hunger pangs with drink and food specials.
— The San Diego Union Tribune, 26 Apr. 2018

Summer is here and the heat has set in, and there's nothing better than an icy cold drink to whet the whistle and keep you refreshed.
— The Poughkeepsie (New York) Journal, 22 June 2017

There will be drinks on sale and a barbecue to wet the appetite.
— The Northern Miner (Australia), 20 Apr. 2018

The restaurant has a 'Yum Bar' for diners that want to grab something light, but any diner can order from the menu and watch it cooked in front of them to wet their appetite.
— The Wimbledon Guardian, 9 Aug. 2017 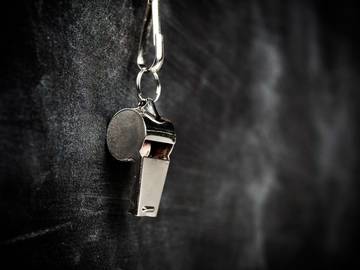 All 'whistles' from this point on will be purely metaphorical.

Considering that wet is the more familiar word in modern English and that the act of whetting—which refers to sharpening the edge of a tool or weapon on a stone—is not as common as it once was in Medieval times, we can somewhat understand (but still not endorse) the mix-up of wet with whet in the expression "to whet one's appetite." (On the other hand, the use of whet with whistle is just unsafe—we'll get to that momentarily.) After all, when something whets your appetite, your mouth tends to water, and it gets—well—wet. But the fact is wet and whet are not interchangeable, and they have diametric connotations: wetting one's whistle "quenches" (thirst) while whetting one's appetite "stimulates" (the desire to eat, as well as drooling).

You Can Wet A Whistle

Since the 14th century, whistle has been a metaphor for the mouth or throat, especially as an instrument for speaking and singing, which means whistle logically calls for wet—similarly, the mouthpiece of a musical instrument sometimes needs to be wetted—and not a verb meaning "to sharpen." Medieval English poet Geoffrey Chaucer used whistle in this figurative way in "The Reeve's Tale," when he penned "As any jay she light was and jolly; / So was her jolly whistle well wet." In time, the set expression "to wet one's whistle" became commonly used with the meaning of "to take a drink (especially an alcoholic one)." About the 17th century, people then inexplicably began substituting whet for wet in the expression.

"Give the boy some drink there! Piper, whet your whistle!"
— Francis Beaumont and John Fletcher, The Beggars' Bush, 1647

It could be speculated that the introduction of "to whet one's appetite" (referring to the "sharpening" of one's desire for food) in the same century had something to do with this erroneous use of whet. However, whet originated in Old English, and figurative senses of the word go back to at least the 15th century, when its meaning "to make keen or more acute" was forged in reference to whetting one's wit, interest, desire, etc.

You Can't Wet an Appetite

By the time gastronomic appetites were said to be "whetted," whet was firmly established in the English language. This being the case, it's slightly baffling as to why people would suddenly begin to misuse whet in the expression "to wet one's whistle"—but alas, the phenomenon is real, and it has persisted for centuries.

It's unlikely that we will see the end to the constructions "whet one's whistle" and "wet one's appetite." They appear far too often in edited writing. All we can do is reiterate that, semantically, when you "whet your whistle," you are sharpening your mouth, which is painful; when you "wet your appetite," you are attempting the impossible by trying to make an intangible (a desire to eat) wet. Wetting your whistle, on other hand, is refreshing, and eating a tasty appetizer to whet your appetite is in the realm of possibility ... and in the end you will feel satiated (and dry).