'Trooper' vs. 'Trouper': Choose Your Winner

They sound the same and can be synonyms. So you decide.

Even though they are different words, trouper and trooper can both be used to describe one who perseveres through hardship or difficulty. Trouper originates from one who is part of a theatre troupe and thus realizes the show must always go on. Trooper originates from the designation given to soldiers and police officers, who are also no strangers to difficult conditions in the line of duty. 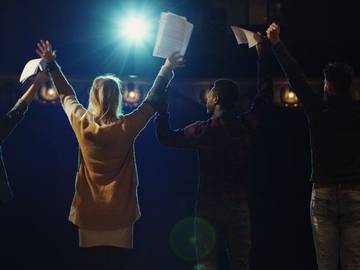 Not pictured: all of these triumphant actors' foot casts.

Do you type out "She is a real trooper" or "She is a real trouper" when mentioning a person (or animal) that has dealt with and persisted through difficulty or hardship without complaint? (The words trooper and trouper are homophones so in speech there is no distinction.) Some readers might be surprised that trouper is the original word that is used to describe a person who carries on gamely through good times and bad.

She's a real trouper, having accidentally dislodged a cap from a tooth the day before. Regardless, she somehow stuck it back on, showed up, and will be seeing her dentist shortly.
— Sandra Coopersmith, The Culver City (California) Observer, 28 Mar. 2019

The Origin of 'Trouper'

Such use owes its origin to the theatrical world of the 19th century, when troupe was first used in English to mean "a company of performers" and trouper to mean "a member of a troupe" (especially one who is very experienced and reliable). In the 20th century, trouper came to be applied to anyone who recognizes that "the show must go on" despite setbacks and adversity. Here's an early example:

"The phrase 'she's a trouper' now has an old-fashioned and faintly derogatory air and is usually bandied about when someone continues to play with a high temperature or a shattering bereavement."
— Peter Bull, I Know the Face, but …, 1959

The Origin of 'Trooper'

Soon after, the homophonic trooper debuted as an alternate, and it still marches on.

… the filmmaker noted that [Kate] Winslet proved to be a real trooper in the scenes in which her character, a free-diving member of the Pandoran race, spends considerable time submerged.
— Scot Huber, Vulture.com, 7 Feb. 2019

Aubrey is a 10 year old, neutered-male, Turkish Angora! … Aubrey is deaf and diabetic and requires insulin injections twice a day. But he's a real trooper and takes them well without a flinch!
— James Smizek, www.news8000.com, 19 June 2019

The alternate is understandable since not only do the words sound alike but trooper is a designation for a soldier, a state police officer, a paratrooper, and a mounted police officer—and in the past, an enlisted cavalryman, as well as his horse.

I met him last when I was buying for the French just before Dunkirk, when he was over here buying troopers.... Mr. Roy was one of the most charming of men, and a wonderful judge of a horse.
— The Book of the Horse, ed. Brian Vesey-Fitzgerald, 1947

All of whom persevere through pressured situations. Additionally, although troop and troupe arrived in English at different times (troop started its English invasion earlier, in the 16th century, in the sense of "a group of soldiers") and developed different meanings, they are related: they share the common Middle French root troupe, meaning "company" or "herd," which is ultimately of Germanic origin. Trooper was enlisted into English in the first half of the 17th century, whereas trouper became a star in the late-19th century.

Acting on stage might not be analogous to carrying out the duties of a brave trooper, but being a trouper has its difficulties. Sometimes actors have to battle through an illness while performing or fight for a part like a "trooper." All in all, if a person is battling something, we realize the more common trooper, instead of trouper, might come to mind. So we won't battle this one out. We're harmless descriptivist lexicographers, and we have enough usage evidence that proves both trouper and trooper are acceptable designations for someone who works very hard, is very reliable, and does not complain when there are problems. Whether you use trouper or trooper in this sense is your call, but trouper is the veteran.