If you're at sea about which to use, we're here to rescue you.

If you're a whale who is whaling a gaming table while wailing, we can sympathize—but only to a point because, generally speaking, lexicographers couldn't afford to make the bet you just made and subsequently lost. On the flip side, if you're a whale having a whale of a time at the gaming table, we're happy for you and hope you'll share your winnings (see previous comment regarding lexicographer pay). And if you need help decoding all the W-words above, keep reading. 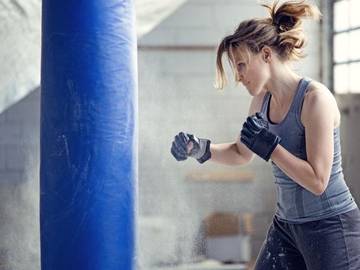 To hit something forcefully and repeatedly is to 'whale' on it.

Whale can refer to a person who is impressive in some way (like a whale is in size), such as a gambler who places large bets. The term is used that way by the character Sam "Ace" Rothstein (played by Robert De Niro) in the 1995 Martin Scorsese film Casino, who at one point calls a gambler named K. K. Itchikawa "a whale … who plays thirty-thousand dollars a hand in baccarat." "That's the one you really gotta watch," he advises. (The term whale watching, by the way, as used in ocean tourism, is a relatively recent addition, being first sighted in the mid-1900s.)

Whale is also a verb for the action of hitting something (such as that gambling table, or a punching bag) forcefully and repeatedly. This might be surprising to those people who misuse the identically (or, in some dialects) similarly pronounced verbs wail or wale with the meaning of "to hit." The verb whale can also imply attacking vigorously or repeatedly, as in "the team whaled on their opponent 20 to 2"; a person might also "whale away" during a debate (meaning they are verbally attacking their opponent and showing no mercy) or "whale into/at" that person with whom they are debating.

Here are some examples of confusion among the homophones (words pronounced alike but different in spelling and meaning) wail and wale in place of whale.

I [Judy Greer] think we did fake slaps. Then [director] Anne Fletcher was like, "Okay, give her one for real now, just so we have it." And that was the one. The same thing happened on Carrie.... I was doing fake slaps with Chloe Moretz in the gym locker room. And then, finally, she was like, "Just hit me once." Man, I wailed her.
— Yahoo Movies, 20 May 2014

Authorities said the 43-year-old man was walking out of the burger chain's Old Fulton Street location, just steps from Brooklyn Bridge Park, when he was accosted by a teen who wailed him in the face.
— NBC (New York), 27 Oct. 2017

In the middle of the night, Dax wales him with the news that Betazed has fallen to the Dominion.
— ScienceFiction.com, 17 Nov. 2017

GIADA DE LAURENTIIS: Bernice and Francis met at the gym several years ago. They've been dating only two months. How do you feel about hitting him, especially since this is such a new relationship? BERNICE: It was strange at first. Now I feel totally comfortable waling at him.
— NBC News, 30 Aug. 2007

This confusion likely became beached in the English language because the word whale is most commonly used as the name for the marine mammal from the order of Cetacea (the order's name derives from Latin cetus, meaning "whale"). Perhaps, for some, it may feel surprising or unlikely to fathom whale as being a homograph (a word spelled like another word but different in meaning and origin). Instead—much to the chagrin of grammarians—they turn to the homophones wail or wale as the more plausible spelling of the verb meaning "to hit." It doesn't help that in most dialects the words are pronounced identically, making them auditorily indistinguishable.

Etymologists are fairly certain that use of the verb whale first occurs in the late 18th century, but how it came about has eluded them. It has been speculated that it originated from the act of thrashing someone or something with a whip made from whalebone (original senses of whale include "to lash" or "to thrash")—but that etymology has yet to be substantiated.

The earliest use of wale is as a noun, and it is akin to Old Norse valr, meaning "round," and Latin vola, the name for the hollow of the hand or foot (in other words, your palm or sole). Originally, the word designated a ridge of earth or stone, as in "The farmer at his autumn plowing, … plowing the stubble into wales" (an excerpt taken from a 1911 poem by British author John Masefield). From there, it semantically evolved to refer to a streak or ridge made on the skin as by the lash of a whip. (By the by, the vertical ridges in a pair of corduroys came to be referred to as wales.) The related verb wale has the meaning of "to mark (as the skin) with welts" and entered English during the early 15th century.

The verb wail is also older than the verb whale. It goes back to the early 14th century and is of Scandinavian origin, akin to Old Norse vei, meaning "woe"—hence, we have its meanings denoting cries of sadness. The noun form surfaced in the 15th century.

It wasn't until the 20th century that musicians, especially in jazz, began being described as wailing on their instruments—that is to say, they were performing very well. More than likely, this sense developed by association of the sounds coming from a well-played instrument to "wails," or "cries."

Allen didn't know quite as many songs, but the ones he did, he had down note for note. His portfolio was heavy with Jimi Hendrix songs, and when he played Purple Haze, McNamee always hung back to watch him wail on his guitar.
— Rachel Lerman, The Seattle Times, 17 Oct. 2018

"It's 1972 and Leon is young and strong and an absolute powerhouse, on top of the piano and wailing on the guitar. It's 'an artificially induced religious experience,' that's what Leon called it in the concert," said Jeffery Haas, the producer of the film "The Best of the Leon Russell Festivals."
— The Williston (North Dakota) Daily Herald, 3 Nov. 2017

We are aware that we have presented an ocean of information on the verbs whale, wail and wale, and we hope we haven't overwhelmed you. Each has migrated into the language at different times with different meanings, and to avoid criticism, it's important to differentiate them.

In sum, you can write about how you whaled a stuffed animal out of frustration, but should shy away from saying you waled it (by definition, that doesn't really make sense); a person with musical talent is free to wail on an instrument all night long; and one should always console a person who is mournfully wailing (and maybe give them a stuffed animal—a whale?—to hug).