'Forego' vs. 'Forgo': The E Is Important

Dinner might 'forego' dessert, but who would want to 'forgo' it?

Although forego and forgo have distinct meanings—forego meaning "to go before" and forgo meaning "to do without"—it is not uncommon to find forego in place of forgo. Most standard dictionaries find such use acceptable, so feel free to express that you "will forego dessert" or "will forgo it," with the only caveat that you will have to explain why you would do such a thing. 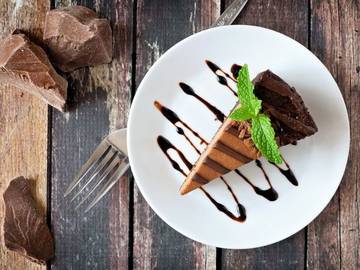 If, however, you mean that dessert will come before dinner (on a special occasion, of course), then you might write on the invite "dessert will forego dinner," but not "dessert will forgo dinner." (Also, cool dinner party!) The lesson here is that forego implies something comes before something else as well as doing without something; however, forgo only means "to do without." In other words, if you "forego" or "forgo" dessert, you might not be satiated; if dessert "foregoes" dinner, you might be too full for dinner. And if dessert does, indeed, "forgo" dinner—great!—but it is hoped that you will find other ways to get a healthy dose of daily nutrients.

Variant use of forego for forgo will occasionally draw criticism from those knowledgeable (such as yourself, just keep reading) of the history of the words and their prefixes. In Old English, forego was foregān, a combination of the prefix fore- and the verb gān, meaning "to go," while forgo was originally forgān, a combination of the prefix for- and gān. The prefixes give the homophones distinct meanings: fore- means "earlier," "before"," or "in front" whereas for- means "so as to involve prohibition, exclusion, omission, failure, or refusal." (The prefix for- is archaic and is almost exclusively used in words coined before 1600, such as forbid.)

Despite this semantic differentiation by the presence or absence of the middle "e," forego and forgo have been used interchangeably for centuries. Current usage evidence, however, indicates that forgo is more frequent in print as a standard verb in all of its inflected forms: forgoes, forwent, forgone, and forgoing. Forego, on the other hand, is common chiefly as a participial adjective. Foregoing, the present participle of forego, implies that something has been mentioned or has occurred before (as in "the foregoing statement is not intended to be an endorsement"), and foregone, the past participle, is used especially in the popular expression foregone conclusion, meaning an outcome is predictable (as in "considering the evidence, it was a foregone conclusion that the defendant would be found guilty"). William Shakespeare popularized that expression in Othello. When his character, Iago, lies that he overheard Cassio dreaming about Desdemona, the jealous Othello takes the dream as proof of infidelity for "a foregone conclusion."

As a standard verb in modern English, forego is uncommon, but it does have occasional figurative use—in contexts like "the new boss's reputation foregoes him"—to suggest that people already know about a person before they meet him or her. Since forego is rarely used today as a true verb, when you encounter it, count on it carrying the "to do without" meaning of forgo.

The vote would allow the county to forego the traditional competitive-bidding process for contractors in the interest of time.
— Rachel Lerman, The Seattle Times, 26 Feb. 2017

He forewent slicing the onion and ate on it like an apple.
— Charles Frazier, Cold Mountain, 1997

Somewhere along the way, the idea of being a professional athlete was misconstrued as foregoing any kind of normal, healthy life.
— Rob Mahoney, Sports Illustrated, 19 Jan. 2016

To differentiate the words, you might think of the "e" in forego being linked to before (the prefix fore- means "before") and a "foregone" conclusion is one made "before" the thing that unfolds. Forgo, on the other hand, does "without" the "e" and means "to do without"—because, well, you "forgot" about that first "e."