You can't put on a mantel, but you can put things on a mantle.

In modern usage, mantel refers to a shelf above a fireplace and mantle refers to a cloak or covering. "Mantle" is also used metaphorically when describing the transfer of power such as when one "takes on the mantle." Some still identify these words as spelling variants, but you are better off separating them.

Mantel and mantle are now usually regarded as distinct from each other, with mantel used for a shelf above a fireplace, and mantle used for a cloak or other covering. However, in the past, they were nothing more than spelling variants—and, perhaps to the surprise of British writers in particular, that is (in part, anyway) still the case. 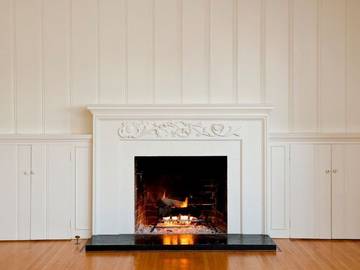 Current usage evidence indicates that mantle is sometimes used in place of mantel to refer to the shelf, and, in American English, it is considered acceptable. Here are a couple of examples:

Devenski noticed a picture of the Atlanta Braves star on the mantle….
— The Los Angeles Times, 28 Oct. 2017

Instead of hanging stockings on the mantle or drinking eggnog around a fire watching holiday movies, there are other whacky traditions that people in different cultures partake in.
— Newsweek, 23 Dec. 2017

Origins of Mantel and Mantle

English mantle and mantel both derive from the Latin word for "cloak," mantellum, which was adopted into Old English in the form mentel. The word eventually evolved to mantle under the influence of Anglo-French mantel—a derivative of the Latin term that was borrowed into early Middle English. Initially, mantle referred to a loose, sleeveless cloak or a protective garment or blanket. It then specified the long cloaks worn by royalty, dignitaries, and ecclesiastics as symbols of authority or preeminence. By the 17th century, this sense of mantle gained figurative use in contexts describing a transfer of power, with allusion to the allegorical passing of Elijah's mantle to Elisha in the biblical Books of Kings.

… Germany has slowly taken on the mantle of a global leader, especially on issues such as climate change and refugees.
— The Christian Science Monitor, 13 Sept. 2017

With each high draft pick the Lakers have made the past three seasons … the immediate conversation becomes whether they can take on the mantle and responsibility of being the man to replace one of the biggest stars in the history of the league.
— Tim Bontemps, The Washington Post, 18 Dec. 2017

In Latin, mantellum also referred to a beam or stone supporting the masonry above a fireplace. That sense was also adopted into English in the 14th century—again through Anglo-French. Evidence suggests that there was a tendency to use the French spelling mantel in early reference to these structures.

In time, mantle was applied to other non-textile structures: for example, it referred to a movable shelter for besieging soldiers and a covering designed to be placed over a flame to enhance its glow. The word's association with solidly-built objects may have stoked the usage of mantle for the shelf.

But bygone are the days of storming castles and gas lamps, leaving us to wonder if use of mantle in reference to a fireplace should now be considered an error. Although we can say that most writers differentiate the homophones, there is still a significant number who seem unaware of the existence of mantel. Historically, using mantle as a variant spelling of mantel isn't incorrect, but we can say that it does not conform to prevalent usage. If you do use it, you probably won't have to take cover but be prepared for some criticism.