Don't rush to judge them differently

The similar-sounding verbs careen and career are often used interchangeably, meaning "to move at top speed," often in a reckless or out-of-control manner. 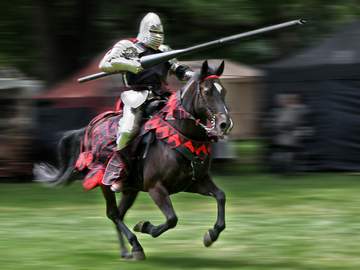 The word 'career' comes from medieval jousting tournaments, where it referred not only to the courses ridden by knights but also to the act of riding a horse at a rapid clip in short bursts.

Squealing children whiz by Amir as they careen down the sloping street with their legs extended, feet off the pedals. “It’s the one day that parents can let kids go out in the street without getting run over,” he says. “They can ride their bikes from one end of the city to another.”
—Joshua Mitnick, The Los Angeles Times, 12 Oct. 2016

Shauna Sazonov was standing outside on a break when she saw a white Ford Escape careen around the corner before hitting several parked cars in a nearby lot.
—Katie Nelson, The (Sioux Falls, S.D.) Argus Leader, 11 Oct. 2016

The wide, clean aisles of India's first Wal-Mart are nothing like Kavita Gopal's usual shopping haunts. There are no bicycle rickshaws careering past her as she buys sacks of rice, no humor-filled haggling over the price of an egg and no demanding neighbors yelling down from their windows for shopping favors.
—Emily Wax, The Washington Post, 13 July 2009

There were Gigi Hadid, Ruby Rose, Ryan Reynolds and Blake Lively, among other young celebrities, … climbing the armor stones to the manicured lawn, upon which they tossed a football and careered down an enormous inflated red bouncy water slide.
—Penelope Green, The New York Times, 23 July 2016

In fact, one intransitive sense of careen is defined as a synonym of career, which is itself defined as "to go at top speed especially in a headlong manner."

Despite their one-letter-off resemblance, careen and career are not etymologically related. Career finds its origins in medieval jousting tournaments. Before it came to be the preferred term for one's professional path, the noun career (from Middle French carriere) referred not only to the courses ridden by knights but also the act of riding a horse at a rapid clip in short bursts.

The verb careen, meanwhile, originally described the action of putting a ship or boat on land, usually in order to clean, caulk, or repair the hull. So how did this verb get conflated with career?

To careen a boat, you need to tilt it on its side. Careen gradually became used to describe the act of a boat tipping over in rough waters, or the similar tilting of other things:

Unguided, our vessel careened wildly in its mad flight, rising ever nearer the rocks above.
—Edgar Rice Burroughs, The Gods of Mars, 1913

The spritsail filled with the wind, suddenly, careening the frail open craft till it seemed it would surely capsize.
—Jack London, The Sea-Wolf, 1904

In the middle of the room the big office desk, with one of its legs broken, careened over like the hull of a stranded ship; most of the drawers had fallen out, disclosing heaps of paper yellow with age and dirt.
—Joseph Conrad, Almayer's Folly, 1895

As motor vehicles became commonplace, careen became a useful word to describe the lurching, side-to-side motion that a vehicle would make when it was racing out of control, thus the overlap between careen and career.

As the outfit turned into the main street the coach careened and ...some of the passengers riding on top were spilled off.
—Willie Arthur Chalfant, Tales of the Pioneers, 1942

I felt the van careen over to the pavement, and then the jolt as it took the curb at speed.
—Jeff Noon, Vurt, 1996

Traditional usage commentators frown upon this overlap, insisting that careen shouldn't be used for something that is only moving at a headlong pace without any kind of side-to-side motion. But popular use tends to drown out those objections. Nowadays, careen is actually the preferred verb for rushing forward, particularly in American English.