'Clench' vs. 'Clinch': Which Is Victorious?

'Clench' still has a tight grip in one sense.

The similar spellings of clench and clinch may make you stop to think about which to use in certain contexts. Is it correct to say that a person clinched their fists or that a deal has been clenched? And for you carpenters out there, which is correct: clenching or clinching a nail?

Historically, the two words have shared meanings including those in the above situations, which means that, by definition, you can use either word. However, current usage evidence suggests you might draw some criticism in your word choice. (This is English. You're always going to get some criticism.) After decades of use, a preference has developed for certain senses of clench and clinch, so substituting the words willy-nilly is cautioned against. 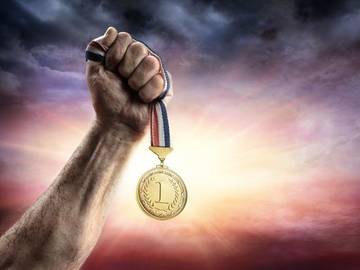 After clinching the win, he clenched his medal.

Clinch began being used in place of the older clench in the 16th century. Originally, both words denoted the act of gripping the protruding point of a nail with a hammer's claw and turning it over into the wood or of flattening a nail's point with the head of a hammer. In this sense, either word is still used, but clinch is more usual.

… the nails that passed through the door or shutter were clenched or doubled over flush with the wood on the back of the stile.
— James L. Garvin, A Building History of Northern New England, 2004

The handles on steamer trunks are typically attached with clinched nails—nails hammered in from the outside and then bent over tightly on the inside.
— Jeanne Huber, The Washington Post, 31 Aug. 2017

By extension of meaning, both clench and clinch came to refer to the act of closing the hands tightly, as in "clenching your fists in anger, frustration, etc." By the 19th century, however, clench took hold, and to this day is the more acceptable choice. Additionally, clench has the meaning of "to hold fast by or as if by grasping tightly."

Stocky and broad-shouldered, with a thick cigar often clenched between his teeth….
— Matt Schudel, The Washington Post, 5 Feb. 2015

The impassioned moments were contained within the dance's overall precision, even at their most heightened demonstration. A gesture of despair, a body fallen to the ground and hands clenching the face in grief, were all done with absolute control.
— Sheila Regan, The Star Tribune (Minneapolis, Minnesota), 30 Jan. 2017

In time, both clench and clinch came to denote settling an argument, deal, or other matter. This meaning seems to have been influenced by the "nail" sense in reference to securing with a finishing stroke—or strokes (depending on one's skill with a hammer).

The data from either experiment alone would clinch the case for the new particle.
— Adrian Cho, Science, 13 July 2012

Clinch is by far the preferred word in this case, but don't be too surprised to find clench in its place (and considering historical evidence, its use is defensible).

Officials say the complicated case led them across state lines multiple times and that it was the public's help and a recent forensic evidence match that clenched the case.
— Alicia Gallegos and Jeff Parrott, The South Bend (Indiana) Tribune, 22 Sept. 2007

One context in which clench and clinch have not shared meanings is in boxing, where clinch alone refers to the act of holding an opponent so that no punches can be exchanged. In sports, clinch also expresses the securing of a victory or of a place in a tournament. This "winning" sense of the word has been applied to other kinds of contests as well, like political elections.

After decades of synonymous use, presently clinch is the preferred choice over clench in all but one sense. Clench holds on as a word suggesting just that—closing or holding tight.