The difference between chili, chilli, and chile, is usually a matter of location. In American English, "chili" is the most common spelling for the spicy peppers as well as the stew and hotdog topping. In British English the preferred spelling is "chilli." In Spanish speaking countries and regions of the US, "chile" is the most common variant.

If you're a seeker of culinary heat, you've probably noticed during your search for spice on restaurant menus that the name for the hot pepper of the genus Capsicum is spelled variously as chili, chile, and chilli. Perhaps you became curious as to why that is and decided to look it up, but then got distracted when the fifth bell rang on that 5-alarm chili. While lexicography can't really help you put out mouth fires (try milk, probably?), we can give you some tips about using chili, chile, and chilli. 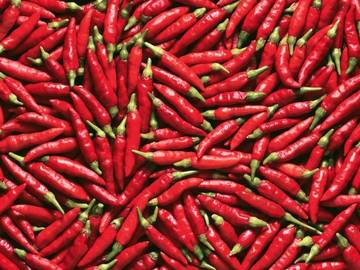 Shoutout to Left Eye and T-Boz, of course.

The spellings are unique to different geographic locations. Chili (plural chilies or chilis) is the standard American English name for the hot pepper as well as the spicy stew, condiment, and spice in which it is a prominent ingredient. On the other hand, in British English, chilli (plural chillies or chillis) is typically used. The spelling chile is of Spanish origin and is common in southwestern areas of the U.S. where that language is frequently used.

Surprisingly, there's not much fiery debate about the origins and use of these spellings. An early record of the name of the pungent pepper is in a 16th-century dictionary of Nahuatl (a language of the Aztecs) in which it is transcribed as chilli (to make clear, the word is unrelated to the chili-pepper-shaped country of Chile). This word was adopted and modified by Spanish-speaking Mexicans as chile, and in the 17th century, it appears in English in the various forms chille, chile, and chilli. The anglicized spelling variant chili is attested later and, although predominant in modern American English, it does appear in 19th-century British writing.

"Try a chili with it, Miss Sharp," said Joseph, really interested. "A chili," said Rebecca, gasping. "Oh yes!" She thought a chili was something cool, as its name imported, and was served with some. "How fresh and green they look," she said, and put one into her mouth. It was hotter than the curry; flesh and blood could bear it not longer. She laid down her fork. "Water, for Heaven's sake, water!" she cried.
— William Makepeace Thackeray, Vanity Fair, 1848

Eventually, British writers settled on the original chilli, and American writers on the shortened chili.

This usage preference extends to the names of common food items and products using the chili pepper. Usually, you'll see chili con carne—referring to a spiced stew of ground beef and minced chilies and other ingredients (with or without beans), and whose name, literally, translates as "chili with meat"—on American menus; in the Spanish-influenced southwest, it might be spelled chile con carne. Chilli con carne, on the other hand, will generally be encountered on menus in the United Kingdom. Americans seem to have been the first to abbreviate this dish's name as chili (as in "a bowl of chili"), which becomes established in English by the late-1800s. By mid-1900s, the chili dog—a hot dog topped with chili con carne—is introduced and becomes a staple of the American food vendor. Across the Pond, the chili dog isn't as relished.

For those who do not know, a chilli dog is a hot dog, but instead of topping it with mustard, or perhaps onions, the Americans opt for chilli con carne, a thing that other nationalities eat on its own as a satisfying meal.
— The Daily Post (North Wales), 20 Jan. 2018

Although chilli can be used as a variant in the name of this hot dog, chile dog implies something different. In the southwestern U.S., if you order a "chile dog," chances are you'll get a hot dog covered with minced red or green chili peppers.

In case you're wondering, chili, chilli, and chile are all applicable in chili sauce—referring to a spiced tomato sauce made with red and green peppers. Like in the other word combinations, spelling depends on geographic location. Knowing this, it is a good idea to be aware of your audience when writing down a recipe or creating a menu that incorporates the chili pepper, or even when penning an ode to the fruit. Serving up the wrong spelling might cause some indigestion.