Bad rap is the original phrase meaning "a bad or undeserved reputation." Bad rep, which contains the literal shortening of "reputation," has historically been interpreted as a spelling error, but has seen enough usage to merit entry. Bad wrap is considered wrong and is best saved for referring to wraps and tortillas. 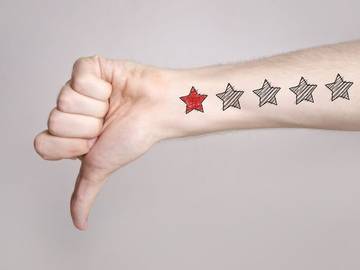 Modifiers describe or limit a word or phrase in a sentence. They can be adjectives or adverbs, or phrases serving as such. Bad and bum are modifiers in the terms bad rap and bum rap, and they pin rap with a negative connotation. A bad/bum rap tends to mean that a person or thing is unfairly or undeservedly being punished or criticized.

"Opossums get a bad rap because of their tail. But they do so much good. They eat ticks, carrion, rotten fruits and vegetables. They don't carry rabies. They deserve much more credit."
— Pam Lefferts, quoted in The Hartford Courant, 13 May 2019

After years of getting a bum rap, wallpaper has returned with a vengeance. Think ultra-stylish prints, dimensional fabrics and new materials that make installation and removal a breeze. Decidedly more dramatic than paint, wallpaper is also a relatively affordable way to transform a room.
— Linda White, The Toronto Sun, 13 May 2019

PRESIDENT [RICHARD NIXON]: If the guy's got a bad rap, … we'll get him out.
[JOHN] DEAN: I am doing that. I talked to Clark...
PRESIDENT: Well, does he think he's got a bad rap?
DEAN: He does—he thinks he's got a bad rap…
PRESIDENT: Maybe he has.
DEAN: It's very funny—
PRESIDENT: I know Rule doesn't have a bad rap … because when, when a, when a bureaucrat takes it upon himself to go out and, and go way beyond the pale in terms of attacking an Administration like he did, that can't be tolerated.
— Nixonlibrary.gov, 28 Feb. 1973

'Rap' as Related to Punishment

Usage of rap in senses relating to censure or punishment goes back to the 18th century, which is illustrated in constructions such as "to take/get the rap for" or "a rap on/over/across the knuckles" (a euphemism for punishment). By the 19th century, in American slang, rap became a term for a prison sentence, as in "to beat the rap" ("to avoid being sent to jail for a crime") or "serving a 10-year rap." Those senses influenced rap sheet, referring to an individual's police arrest record. The meaning "a negative and often undeserved reputation or charge" followed, and today it most often occurs in the said collocations bad rap and bum rap. (Bum, by the way, can mean "not valid or deserved" and is believed to be a shortening of bummer, a modification of German Bummler, meaning "loafer," from the verb bummeln, "to dangle or to loaf.")

Like a criminal accusation, a bad rap is something that a person or thing is hit with (rap's original meaning is onomatopoetic and refers to a sharp blow or knock). Essentially, when a person or thing "earns," "receives," "gets," or the like, a bad rap, it gains a bad reputation. Which brings us to the term bad rep.

Meghan Markle has been getting a bad rep lately, and a new report claims that the Duchess has been making some very diva-like demands….
— Lauren Dubois, International Business Times, 6 Dec. 2018

Frozen pizzas have a bad rep, especially those that are health conscious, but I find myself craving this after work when I simply want to be a couch potato.
— Katie Kenny, Honolulu Magazine, 13 May 2019

Why should you get a bad rap for using bad rep in place of bad rap when, by definition, bad rap can be broken down to mean "a bad and undeserved reputation"? We don't know exactly. Criticism of bad rep as a misspelling of bad rap seems outmoded.

Merriam-Webster is a descriptivist (not prescriptivist) dictionary publisher. In other words, our dictionaries record the English language as it is actually used rather than dictate how the language ought to be used. (We ensure this by critically analyzing usage evidence.) We see evidence that bad rap and bad rep are used interchangeably, and our definition of rap reflects that. Perhaps continual usage (but, more importantly, reader and listener approval) will clear the bad rap of bad rep as a synonym for bad rap. Bad wrap as a substitute, however, is not supported.

Trial attorneys can get a bad wrap. What do you think can be done (or is being done) to expel this stereotype?
— The Legal Examiner, 23 Oct. 2018

To wrap up: if you're using bad rep in the place of bad rap, you might be given a bad rap—but we are seeing the light of synonymous bad rep usage. Unless you have taken a bite out of a bad tortilla or pita wrap, please refrain from using bad wrap. It's not palatable.