A Twist on ‘Turquoise’

History just a stone’s throw away

Before turquoise described a greenish-blue color, it described a mineral of that color. That alone is not unusual; certainly we associate emeralds with green and rubies with red, and words like aquamarine and cobalt are used fluidly to describe things whose colors resemble those minerals. 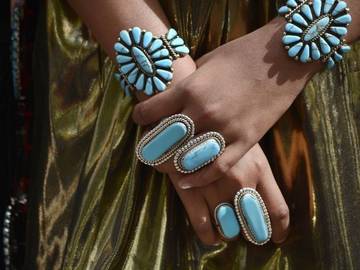 The English spelling was likely influenced by exposure to the French 'pierre turquoise,' or “Turkish stone.”

The mineral known as turquoise is one that we commonly associate with the American southwest and mines in Arizona and New Mexico. Long before that, however, turquoise was mined from the Sinai Peninsula; the region of Sinai was known as Mafkat (“country of turquoise”) to the ancient Egyptians.

It is believed that the mineral was then transported to the west through Turkey; the French word turquois means “Turkish.” The Travels of Marco Polo, the 13th-century travelogue purportedly relayed to the scribe Rustichello da Pisa, includes references to “the precious stones that we call turquoises” in the mountains of eastern Persia. The English word, however, derives from the Middle English turkeys and the Anglo-French turkeise; The French-looking spelling was likely influenced by exposure to the French pierre turquoise, or “Turkish stone.”

In the New World, turquoise was highly prized by the Aztec and Mixtec peoples, used for things such as knife handles and mosaics. But since there was little evidence that turquoise was ever mined in Mesoamerica, some historians have wondered if the material was acquired through trades with mining regions to the north. Recent scientific analysis, however, has shown that the turquoise used by Mesoamerican cultures probably had a local origin. If anything new turns up in etymological analysis, we'll be sure to let you know.