'Truthiness': Can Something "Seem," Without Being, True?

When you just know. 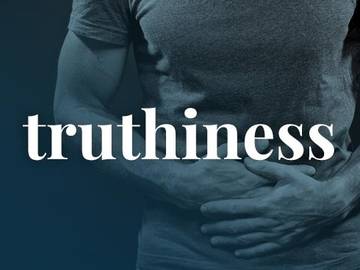 What does truthiness mean?

Truthiness refers to the quality of seeming to be true but not necessarily or actually true according to known facts.

Where did truthiness come from?

In 2005, Stephen Colbert became the host of the eponymous late-night talk show, The Colbert Report. During his first show, Colbert presented the word truthiness, using it to express a kind of "truth" that is derived from a visceral feeling rather than from any known facts.

This interpretation of "truth" became a theme for the show, where Colbert rants about political and cultural issues and about pundits who ignore evidence that goes against their claims, and sometimes even invent facts to support their opinions.

While Colbert is the obvious source for the contemporary definition of the word, he is not the first person to use truthiness. The Oxford English Dictionary has record of its use dating to the 1830s in the sense of "truthfulness," but this use is considered rare now. The OED also enters Colbert's sense of truthiness and credits the talk-show host as its coiner.

How is truthiness used?

In 2006, truthiness was chosen as Merriam-Webster's Word of the Year by their dictionary users. The word continues to have occasional use.

Whether it's blind bias in favor of one's own sports team, … 9/11 conspiracy theories or AIDS skepticism, Manjoo concluded that the feeling that something is true had, for many, become a substitute for actual evidence. It's what Stephen Colbert called "truthiness." Now, Colbert and Manjoo's idea is nearly a decade old—which makes it almost quaint, considering where we are today. If they meant to warn us against the slippery slope toward truthiness and "true enough," it's clear we didn't listen.
— S. E. Cupp, The Chicago Sun-Times, 23 Mar. 2017

Confuse, distract, provoke and flood the zone with factoids and truthiness until nobody can be sure what's real and what’s not.
— Eugene Robinson, The Washington Post, 7 May 2018