We have a hard decision to make.

The trolley problem is a thought experiment in ethics about a fictional scenario in which an onlooker has the choice to save 5 people in danger of being hit by a trolley, by diverting the trolley to kill just 1 person. The term is often used more loosely with regard to any choice that seemingly has a trade-off between what is good and what sacrifices are "acceptable," if at all. 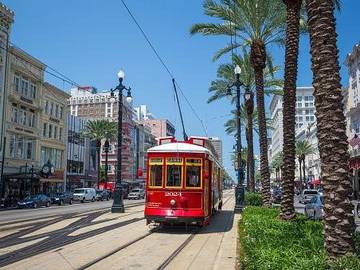 Trolley problem is the name given to a thought experiment in philosophy and psychology. It has sprouted a number of variations, but is distilled to something like this: you are riding in a trolley without functioning brakes, headed toward a switch in the tracks. On the current track stand five people who stand to be killed if the trolley continues on its path. You have access to a switch that would make the trolley change to the other track, but another individual stands there. That person is certain to be killed if the switch is activated.

So do you switch tracks or not?

The problem comes up in discussions of ethics and moral choice, pitting the idea of responsibility against the measurement of good by an end result. On the one hand, it might seem obvious that the deaths of five would be a worse result than the death of an individual. On the other hand, in order to change course, you have to make the active decision to put that doomed individual in the path of the trolley.

The school of thought that killing the one person to save the five is usually aligned with utilitarianism (the belief that the best actions are those that result in the greatest good for the greatest number of people). Another school, that of deontological ethics, argues that an action is inherently right or wrong regardless of the consequences. This school would favor against taking the action that results in the killing of the individual on the other track.

The trolley dilemmas vividly distilled the distinction between two different concepts of morality: that we should choose the action with the best overall consequences (in philosophy-speak, utilitarianism is the most well-known example of this), like only one person dying instead of five, and the idea that we should always adhere to strict duties, like “never kill a human being.” The subtle differences between the scenarios provided helped to articulate influential concepts, like the distinction between actively killing someone versus passively letting them die, that continue to inform contemporary debates in law and public policy. The trolley problem has also been, and continues to be, a compelling teaching tool within philosophy
— Lauren Cassani Davis, The Atlantic, 9 Oct. 2015

Twitter users are pointing out just how ridiculous the capitalist dilemma is right now — it's barely a trolley problem at all. Why put so much weight on economic development when there are literal human lives at risk?
— Morgan Sung, Mashable, 24 Mar. 2020

History of the Trolley Problem

English philosopher Philippa Foot is credited with introducing this version of the trolley problem in 1967, though another philosopher, Judith Thomson of the Massachusetts Institute of Technology, is credited with coining the term trolley problem. (Thomson also posed an alternate scenario, which involves the question of whether a bystander on an overpass should throw a fat man over the rail to his death in order to stop a trolley below from killing the five people on the track.)

Recent events have elevated the trolley problem to prominence in popular culture and political discourse. Notably, it served as a device in several episodes of the NBC sitcom The Good Place, whose characters are challenged with finding a path to goodness in the afterlife. As Chidi Anagonye, a professor of moral philosophy, leads discussions of ethical decision-making despite being chronically indecisive himself, he participates in the trolley problem on an actual trolley to bloody comic effect. (The trolley problem has also figured into the storylines of two other series, The Unbreakable Kimmy Schmidt and Orange Is the New Black.)

The trolley problem is one that can be easily visualized, and it can be used as a metaphor in so many scenarios that it has naturally become the subject of a number of internet memes.

"The trolley problem is just one more depressing example of academic philosophers’ obsession with concentrating on selected, artificial examples so as to dodge the stress of looking at real issues."
- Mary Midgley pic.twitter.com/Zx9KjSaN58

The trolley problem is invoked in political decision-making, and has surfaced in discussions concerning the response of leaders to the COVID-19 pandemic, and the moral implications of taking action that could reduce overall harm while endangering a select number in the process. In the technology sector, a scenario that closely resembles a literal trolley problem comes up with regard to autonomous vehicles and how to program them to harm the fewest number of people in the event of inevitable collision.

Experts feel the proposed $291 million budget will be insufficient, not to mention that the massive undertaking will take dedicated cooperation between federal, state, and local government. Also, turning our eye home has lessened resources slated to go to fighting AIDS abroad, but you’ll have to solve that particular Trolley Problem for yourself.
— Jef Rouner, The Houston Press, 3 May 2019

The Predator drone, conceived in the 1990s and flown for millions of hours since then, has changed the way the US fights wars, both for better and for worse. It keeps US troops out of harm's way, but it also removes them from the in-the-moment decisions of war. Predator strikes can be incredibly precise, but they have killed hundreds of civilians. Drone warfare has been hotly debated since its inception—it's both a technological debate and a moral one, a sort of Trolley Problem for the skies.
— David Pierce, _Wired _, 1 Feb. 2018

The actual philosophical concepts aren't as important right now as the dilemma itself. It's supposed to be hard. Either way, you're on a trolley that smooshes someone and that stinks. If there were an easy answer, it wouldn't be a "problem." It would be the Fun Trolley Puzzle! 3/