This week's lookups were driven by a film, a crossword puzzle, and the battle for the Republican nomination 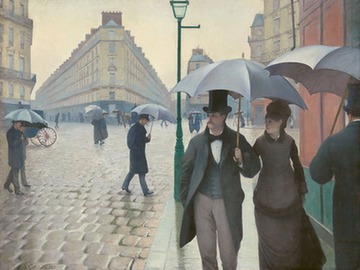 Sometimes a crossword puzzle will cause lookups in the online dictionary to spike. This week, the word was 'boulevardier'—"a frequenter of the Parisian boulevards."

​On 4/24, a crossword puzzle sent people to the dictionary to look up boulevardier. A near-synonym of flaneur, boulevardier describes one who is worldly and socially active, whereas a flaneur is an idle wanderer. There's also a cocktail called a boulevardier, which we're pretty sure both types would enjoy.

Lo and behold​, coverage of the Werner Herzog film Lo and Behold led to a surge in lookups on 4/25. The phrase is used to express wonder or surprise.

Lookups for collusion​ spiked on 4/26, after Trump accused Cruz and Kasich of agreeing or cooperating secretly for a fraudulent purpose. The word has playful roots—it comes from the Latin ludere, meaning "to play."

​Gullible​ spiked on 4/28 after it showed up in a League of Legends thread on Reddit and proved that the definition of gullible always makes a good punchline.

Cruz's announcement of a running mate confused some people, but perhaps they were just wondering what élan​ meant—lookups for the word surged after he used it in his speech on 4/27.

​Finally, lookups for Lucifer​ spiked 7700% after former Speaker of the House John Boehner publicly referred to Ted Cruz as "Lucifer in the flesh." Although it is possible that Boehner was making a muted classical reference and intended to characterize Cruz as a bearer of light, this seems unlikely.