Both toward and towards are fine to use and have been used interchangeably since their creation in the 9th century. There have been some commentators who object to the use of towards but those objections are not supported by the usage evidence. Choose the one you prefer. 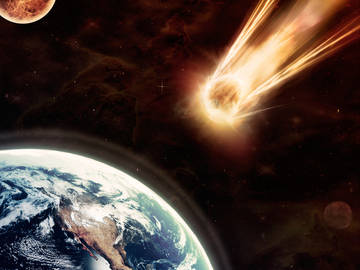 Is that meteor hurtling toward Earth, or towards it? If you're an American, you can use either word—some will claim that 'towards' is incorrect, but it's really a matter of personal preference.

For those who are not familiar with this particular regional quirk, there are some who hold that toward is preferred in American English, while towards is preferred in British English. But no one can come up with a good reason for the rule.

The word toward(s) is old: it goes back to the 9th century, where it was a blend of the word to and the suffix -weard, which was used to refer to a specific direction. If you go toward something, you etymologically move in the direction to that item. But from the earliest moment of toward's life, it was spelled both with a final -s and without. This is a bit odd, since the Old English of the 9th century was very particular about its case endings, but it appears that this was fairly common when it came to direction words in Old English: just about every -ward word from this era that was formed with an adjective, adverb, or preposition—forward, backward, froward, inward, outward—has an analogous -wards mate that is almost identical in meaning. (Occasionally the -wards word also referred subtly to the manner in which the motion was executed, but this doesn't appear to be consistent.)

With or Without "-S"

The early -ward and -wards words functioned as adjectives, adverbs, and nouns, but for reasons that we don't fully understand, grammarians and usage mavens felt that this messy state of affairs needed some tidying. The first call to arms that we can find in the usage literature is the Edward S. Gould's collected musings on usage and abusage called Good English, published in 1867. In an article that is specifically about toward and towards, Gould quotes a bit of (not entirely spurious) etymology, notes that the Old English -weard has given us a number of words, and then claims that the addition of -s to these words is an "innovation" without merit:

But where is there a warrant for the addition of the final s to any of the words,—excepting its incidental, or perhaps accidental, use by certain old English writers, as Milton, Shakespeare, Dr South, and others? Those authors are doubtless followed by modern writers without number; but also, one might suppose, without reflection on the part of the writers; [...] The etymology of the word furnishes no pretext for the s; its addition is merely arbitrary,— though, also, capricious; for few writers use it uniformly. If any person should seek to defend it, he must carry his defence beyond the immediate cases [toward and towards] and include anywhere, everywhere, nowhere, anyway, everyway, noway, and so on. Ignorant usage has already made that addition. In the common parlance of uneducated people, nothing is more common than somewheres, anywheres, anyways, nowheres, etc.; and, as yet, nothing is more vulgar.

The British, however, had little to say about toward and towards until the 20th century. H. W. Fowler put forth the contention in his 1929 Dictionary of Modern English Usage that all the -ward words are usually adjectives and all the -wards words are usually adverbs or nouns. (This is not borne out by the millennium of actual use of toward and towards.) Of towards itself, he says:

Of the prepositions [toward and towards] the -s form is the prevailing one, & the other tends to become literary on the one hand & provincial on the other.

The adjective toward is much rarer than both the adverb and the preposition, which means that Fowler's prescription is essentially to use towards. It may be that toward was deemed literary to account for its historical use by solid English authors, and provincial to account for its preference in America.

What should you do? If you're an American, you can use either toward or towards, depending on what sounds more natural to you. There are those who will claim that towards in American English is wrong, but it's really a matter of preference.