No need for them to be all twisted up

Tortuous means "marked by repeated bends, turns, or twists." It can also be used metaphorically to describe something deviously indirect or circuitous. Torturous, on the other hand, generally means "extremely unpleasant or painful," or metaphorically "painfully difficult."

Usage guides often warn against confusing torturous and tortuous. These words do have meanings that are quite distinct, but one of them is commonly used in place of the other. This sort of mix-up is due to the fact that torturous and tortuous are etymologically related, and also simply because the two words look similar. 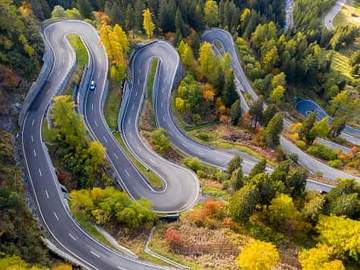 The Origin of 'Tortuous' and 'Torturous'

Both tortuous and torturous come from the Latin torquēre, meaning “to twist.” Tortuous has retained meanings that are closely related to this root, including “marked by repeated twists, bends, or turns,” “marked by devious or indirect tactics,” and “circuitous.” Torturous, on the other hand, carries meanings that are more related to torture and pain, such as “very unpleasant or painful,” “causing torture,” and “painfully difficult or slow.”

The misuse of these words that we most often encounter is that of torturous (“painful”) where tortuous (“winding”) is called for.

An essay by Richard John Neuhaus follows a torturous path to its flabbergasting final sentence: “That is why, I reluctantly conclude, atheists cannot be good citizens.”
— The Washington Post, 3 May 2020

I fear that, notwithstanding his thoughtful, clear and persuasive analysis, we have a long and torturous path ahead.
— The New York Times, 9 Feb. 2020

Along with the price hikes there will be shortages, as many products will have to take a torturous route to Ireland or be blocked entirely.
— Irish Times (Dublin, IR), 16 Jan. 2019

It should be noted that something may easily merit being described by either of these adjectives. A climb up a mountain that is both arduous and winding may be torturous and tortuous.

Without food or shelter for 15 days, he survived freezing temperatures at 12,000 feet while "crawling, slipping and sliding to safety over 20 torturous miles of high country considered impassable even now to trained mountaineers," The Times reported.
— Steve Harvey, Los Angeles Times, 17 Oct. 2010

However, in cases where the surrounding context does not make clear which word is called for writers may wish to choose a different word (such as circuitous or painful).