No. It should be toothpaste, and here's why.

Our universe is plagued with tough ontological questions. Why does evil exist? Is there existence beyond death? And the most pressing of them all: Why is it toothpaste, not "teethpaste"?

If what we call the “Toothpaste Logical Fallacy” has kept you up at night (on Twitter, endlessly DM’ing us), allow us to help you find your rest. 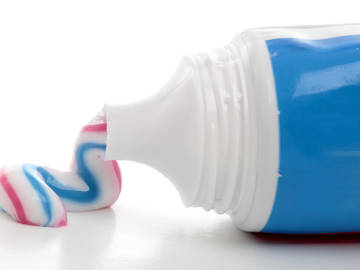 This doesn't need to get messy.

Toothpaste is, for those who may be unsure, a word that refers to a compound or paste used for cleaning the teeth, and therein lies the rub: most of us have more than one tooth to clean. Logically, then, it should be teethpaste.

But only by your own logic, and English, as the saying goes, doesn’t play. In English, there’s a whole host of compound nouns wherein the first noun in the compound is an object or body part, and the second noun in the compound refers to an agent used, applied, or otherwise connected to that object or body part. In shorthand, you could translate these compounds as "(second noun) for (first noun)." Toothpaste fits this model, as do eyeglasses, nail polish, nail clippers, footwear, earphones, legwarmers, hairbrush, and many others. Because you are intelligent and a careful reader, you no doubt notice the pattern here. Those body parts should be plural, but they aren’t.

That’s because there’s actually a well-established system that governs how these compounds are formed. The singular is used to refer to the whole in almost all these noun+agent compounds. They are, to be honest, much easier to say. That doesn’t just go for eyesglasses: bookscase? Carswash? Keysboard? Dishessoap? C’mon. Even English has standards.

Should it be teethpaste? “Should” and “are” are two different things, and we only truck in reality. Sorry, all you teethpaste evangelists out there. We suggest you get back to puzzling out the problem of evil instead.