The Joy of Tom Swifties

Funny and Exuberant Puns That Turn Adverbs into Punchlines

A Tom Swifty is a play on words taking the form of a quotation ascribed to Tom and followed by an adverb. Here's a good example:

"The thermostat is set too high," said Tom heatedly. 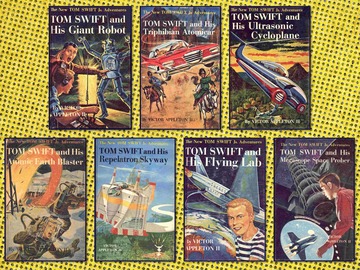 Droll humor is a feature of much of the material Espy collected, as is apparent in the Almanac entry for Tom Swifties. The form takes its name from the main character in a series of adventure books published by Edward Stratemeyer beginning in 1910. (Although the books were all credited to "Victor Appleton," he was imaginary – the books were actually written by several different authors.) In the series, which had titles that included Tom Swift in the City of Gold, Tom Swift and His Wizard Camera, and Tom Swift and His Great Searchlight, the authors supposedly revealed a weakness for adverbs, attaching an excess of them to dialogue in order to add color and variety to the narration.

Sometimes the puns are simple:

Sometimes they require a little more thought to get:

And some are inspired:

"I just ran over my father," Tom said transparently.

And the all-time best Tom Swifty:

Tom Swifties seem to have fallen into disuse in recent years – they're overdue for a revival. If nothing else, they're fun and they'll help keep your mind sharp. That's what we say, pointedly.