Good origins we bring to you and your kin

Yuletide, a word used as a synonym for Christmas, is a combination of Yule, from the pagan winter festival Jol, and tide, which here refers to an annual festival or the season of said festival. Tide is also related to the Old English for “time.” The related word tiding, comes from an Old English word meaning “to happen by fate,” and thus “good tidings” are merely wishes for good fortune.

In modern use, the word Yuletide is occasionally invoked as a synonym for Christmas. Yuletide is the much older of the two words; its first half, yule, derives from an Old English noun geōl. Both geōl and its etymological cousin from Old Norse (jōl) referred to a midwinter pagan festival that took place in December. 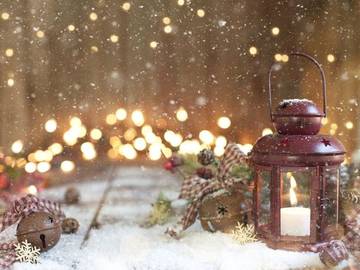 Around here, 'tis always the season for etymology.

The Meaning of 'Tide' and 'Tidings'

Yuletide also has a comparable form in Norse (jólatíð). The –tide suffix in Yuletide can also be found in Christmastide; the drift in meaning of Yule from a pagan celebration to what we know as Christmas came with the rise to prominence of Christianity in England, and now Yuletide and Christmastide (or Christmas Time) generally refer to the festival season beginning with Christmas Eve and lasting until after New Year's Day or especially in England until Epiphany.

In addition to its familiar sense referring to the rising and falling of ocean levels, the dictionary defines tide as a standalone noun: “an ecclesiastical anniversary or festival; also : its season.” Deriving from the Old English tīdan, it can be used in combination for celebrations that pop up at other times of the year, such as Eastertide. Tīdan resembles the Old English noun tīd, meaning “time.”

Another seasonal relative is the noun tiding, heard in its plural form in holiday carols like “We Wish You a Merry Christmas” and “God Rest Ye Merry Gentlemen.” Its use in the latter song (“tidings of comfort and joy”) echoes the line delivered by the angel in KJV Luke 2:10 (and popularized for certain generations of television audiences by Linus Van Pelt): “Fear not: for, behold, I bring you good tidings of great joy, which shall be to all people.”

There is nothing semantically inherent in tidings that pertains to Christmas; it derives from Old English and relates to betide, meaning "to happen especially by fate.” The “good tidings” brought to you in “We Wish You a Merry Christmas” are simply wishes for good happenings (leveraged by a somewhat hostile demand for figgy pudding).

Use of tidings historically swells in December, as journalists and ad copywriters anticipating the holiday try to pack in as many festive allusions as they can:

Greetings, disillusioned Eagles fan. Behold, I bring you good tidings of great joy. Because there hasn’t been a lot of that sort of thing around here lately.
— Les Bowen, The Philadelphia Enquirer, 6 Dec. 2019

Glad tidings for audiences who, like the book’s tomboyish protagonist Jo March, might be grumpily anticipating a holiday season devoid of pleasures: Gerwig’s first film since her solo directing debut, Lady Bird (she had previously co-directed a movie with Joe Swanberg), arrives as a present in itself.
— Dana Stevens, Slate, 4 Dec. 2019

Good tidings we bring, to you and your SIM! The festive period is always a great time to bag a bargain, and there's no exceptions when it comes to phone plans.
— Alex Choros, Lifehacker Australia, 12 Dec. 2018

But occasionally the word pops up in the off-season:

The Mets have had nothing but unhappy tidings since Piazza's fly ball nestled into the glove of Yankees center fielder Bernie Williams for the final out of the 2000 World Series.
— Steve Campbell, The Times Union (Albany, NY), 9 July 2001

If you'll excuse us, we're going to show up at someone's house and sing until they give us pudding.