How the crossword has adapted to life online

The following is an excerpt from Thinking Inside the Box: Adventures with Crosswords and the Puzzling People Who Can't Live Without Them by Adrienne Raphel. 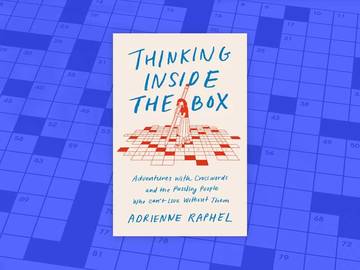 Photo: From THINKING INSIDE THE BOX by Adrienne Raphel, courtesy of Penguin Press.

The version that’s thrived in the digital landscape is the original crossword. Computers have hardly made the crossword obsolete. In the digital age, the puzzle has only continued to prove its cockroachlike ability to adapt while remaining exactly the same.

The New York Times launched its digital crossword in 1997, fifty-five years after the puzzle’s print debut in that paper. The digital Times puzzle was developed to be the equivalent of carrying around a folded-over Arts section in your pocket, something that follows you on all your screens. You can begin the puzzle on your phone in the subway, plug away on your desktop at work, and finish it on your tablet at night.

Originally, the online version, like its print counterpart, got bundled with the paper; a subscription to the digital Times also gave you access to that day’s crossword puzzle online. But in 2012, for the first time in the then-seventy-year history of the Times’s crossword, the puzzle—at least, the digital version—got monetized. If you subscribed to the Times digitally, you would no longer automatically get the crossword; now, you had to pay a separate fee and download separate software to play the puzzle on your devices. You also didn’t automatically get a subscription to the Times if you bought a Times crossword subscription. Until this point, a newspaper’s crossword solvers also had to be its readers, even if they did nothing with the rest of the paper except flip through it to get to the puzzle. But now, the New York Times and the New York Times crossword became distinct entities.

The Times’s crossword app has been housed in-house since 2014. Before then, the Times had outsourced the game to another company’s platform, but since the app was doing so well, corporate decided to expand the operation. In 2019, the Times crossword app had over half a million subscribers, double what they’d had the previous year. At $39.99 a subscription, that’s over $20 million in crossword bucks per year. And the Times’s app is hardly the only game in town. Crossword apps are legion—Redstone Games’s Crossword Puzzle, Penny Dell Crossword Daily, Crossword Quiz+, Clean Crosswords, Little Crosswords—and when you include word game apps in general, the list explodes.

The digital crossword soon launched an entire Games department at the Times. Although the flagship of Games is the crossword, the department’s programmers, marketers, designers, and editors have developed a flotilla of ancillary puzzles, some retooled old favorites, some new for the site: Letterbox, Set, KenKen, Sudoku, Spelling Bee, and more.

The print crossword, technologically speaking, has changed only in that [editor Will] Shortz emails completed files to Manhattan rather than using fax or snail mail. By contrast, over a dozen full-time Times employees are dedicated to running the Games department smoothly: back-end programmers making sure that the puzzle works; front-end programmers who translate games to all platforms; API and iOS specialists who fix compatibility issues; development managers; a designated games marketing team; designers who build new games; and designers who foresee and precorrect problems, like making the Mini crossword more prominent on the site to addict new users.

In 2014, the Times introduced a bite-sized version of a crossword, only on its digital app. The Times wanted to be able to offer something for free to hook solvers into paying for a crossword subscription, so Joel Fagliano created a miniature amuse-bouche. The Mini is usually a five-by-five grid, in comparison to the daily fifteen-by-fifteen, and the clues are, on average, much more straightforward. A difficult daily might take half an hour, minimum; the toughest Mini might take two minutes, max.

Crossworders initially greeted the Mini with mixed reviews. In a Slate article with the demure title “The New York Times ‘Mini Crossword’ Is an Utter Disgrace to the NYT Crossword Brand,” contributor Ruth Graham lambastes the Mini in maximal bombast; like the Tamworth Herald writer who dreamed up the hyperbolically hysterical hyacinths in “AN ENSLAVED AMERICA,” Graham is at once serious in the substance of her gripe and giddy with the vitriol of her style. The Mini, she argues, devalues the Times’s brand, dubbing it “the People magazine crossword puzzle of the New York Times.” Mini, she writes, “is a four-letter word for ‘Are you kidding me?’” (There are other four-letter words unsaid.) “It doesn’t tickle your mind,” she continues, “so much as punch you in the brain with its blatancy. It’s so clearly designed as a mere loss leader for the actual crossword that finishing it has the exact opposite effect that a good puzzle should have—it’s less a tiny surge of accomplishment than the sense that you’ve wasted an entire minute of your time.” The Mini’s sins are threefold: First, it’s too easy; it’s too obviously mere marketing bait for the paid puzzle; and, most importantly, it’s a waste of time.

Graham’s complaints about the Mini echo the moralistic finger-wagging of cross Brits in the twenties. The crossword still taps directly into our horror of wasted time, or that we haven’t maximized every minute if it’s possible to do so. If we’re not working, we should be working on something else: relaxation, exercise, an artistic project, after-school activities, cooking, meditation, a second job, a third. We should be constantly grooming to become the smarter, faster, better versions of ourselves.

The crossword proper is now culturally accepted as better than doing nothing: done day after day, the crossword might even actively strengthen your brain, a mental equivalent of holding a plank pose. Yet the puzzle is still deeply tethered to our abhorrence of wasting time. We use techniques such as memory studies to help ourselves rationalize this addiction to the crossword, or to the routine of opening up the puzzle, but however we react—pride, rationalization, acceptance, rejection—the crossword is an activity that forces us to confront why we waste time, or, rather, why we keep ourselves occupied all the time, even when production produces nothing. But the Mini, Graham argues, is not just a nuisance and a disgrace; it’s a menace. Unlike the crossword proper, it’s a time-suck that’s a waste of time.

The Mini began life marketed as a gateway drug to the regular crossword, but it’s now become a distinct form in its own right. Although the Mini might be regarded as a waste of time by self-identifying cruciverbalists, who have justified their regular puzzle to themselves, non–regular solvers see the Mini in the opposite light; while the crossword itself might be too big and too time-consuming for every day, the Mini is not a time-suck but a whetstone, sharpening the mind for the day to come. A few years after beta-testing in the app, the Mini found a home in the print paper: not in the hinterlands of Arts & Leisure with the regular puzzle, but in prime real estate on A3, right under the space Tiffany & Co. has advertised in since 1896. To mimic the print experience, the analogous right-hand corner of the website featured a link to the crossword, inviting readers to “play today’s puzzle.” The hand extended in greeting is also a hand extended for cash: to play today’s puzzle, you have to pay.

On the other hand, the Mini also extends a hand to people who might not have otherwise found a place in the puzzle proper. Fagliano told me that his favorite moments of the job are when college students and recent graduates approach him, excited about the little puzzle. The Mini is porous and immediate. Because Fagliano can make them so quickly and the turnaround time is so short, Minis can absorb a lot of the of-the-moment pop culture that regular puzzles, with their long lag between acceptance and publication and with their need to maintain shelf life, can’t always accommodate. The Mini also gives an entry point into this world of crosswords.

From Thinking Inside the Box: Adventures with Crosswords and the Puzzling People Who Can't Live Without Them by Adrienne Raphel. Copyright © 2020 by Adrienne Raphel. Published by Penguin Press, an imprint and division of Penguin Random House LLC. All rights reserved.

For all you puzzling people out there, you can play our crossword and a number of other wonderful word games here!