Some of the words that defined the week of September 27, 2019 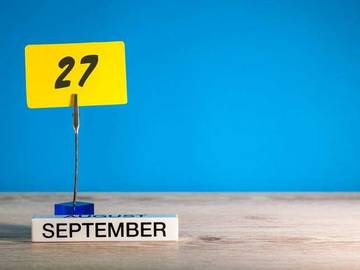 This week, in a stunning turn of events that was actually quite similar to every other week over the past several years, political events had a large influence on which words were in the news and on people’s minds. It appeared that every news show made a blood vow to use the word Rubicon at least thrice daily.

The California Democrat said the president “may force us to go down this road” of impeachment. “I have spoken with a number of my colleagues over the last week and this seems different in kind,” he said. “And we may very well have crossed the Rubicon here.”
— Daniel Politi, Slate, 22 Sept. 2019

Many more people found themselves concerned with the precise meaning of the word though than is usual at this time of year, after the word made a small, but important, appearance in the recently released account of President Trump’s conversation with the Ukrainian president.

This is the most interesting part of the call summary:

Trump responds: "I would like you to do us a favor, though," and asks him to help investigate a conspiracy theory about the 2016 DNC hack. pic.twitter.com/tmhVwEN8lH

The President’s continued dissatisfaction with the standard orthography of English caused lookups for little to spike.

While we do not now provide any variant spellings for little, the word has enjoyed great variety in form over the centuries. There have been dozens and dozens of ways to spell little, including liddle (although it is not as common as lyttyll or lyttle). The reason we do not account for these variant spellings in our dictionary now is that all but little have largely fallen into disuse.

He tells your Madestee true, for aull he is a liddle out of season: but cym every man tell as much as he cannow, my qualitie is I hope sufficiently knowne to his Madestee, that I am Rector Chori is aull my ambitions, and that I would have it aull Welse; that is the s'ort and the long of the Requests.
— Ben Jonson, The workes of Ben Jonson, 1641

Shakedown may not have enjoyed as much visibility as Rubicon over the past week, but it still was in use considerably more than it usually is, as several public figures applied it to President Trump’s actions.

If you too would like to use the word shakedown, but find there are no circumstances in your life which merit being referred to as “extortion,” fret not, for shakedown has meant many things since its appearance in the English language around 1730. It may also refer to “a boisterous dance,” “an improvised bed (such as one made up on the floor)” (the earliest sense of the word), “a thorough search,” or “a process or period of adjustment."

Speaker of the House Nancy Pelosi was reported to have welcomed President Trump to her wheelhouse last week. And lexicographers are just as disappointed as you when they learn that a wheelhouse is not a house made of wheels.

Speaker Nancy Pelosi and President Trump were discussing gun violence over the telephone Tuesday morning when the president abruptly changed the topic to an intelligence community whistle-blower complaint that had Democrats talking about impeachment.

“Mr. President,” she declared, according to a person familiar with the conversation, “you have come into my wheelhouse.”
— Sheryl Gay Stolberg, The New York Times, 25 Sept. 2019

When Ms. Pelosi spoke of her wheelhouse she was not referring to that word’s status as a synonym of pilothouse (which means “a deckhouse for a ship's helmsman containing the steering wheel, compass, and navigating equipment”), or “a place or center of control or leadership (as in an organization).” Nor did she intend to invite Trump to “the section of the strike zone where it is easiest for the batter to hit the ball well,” another meaning of wheelhouse. As far as we can tell, the sense of wheelhouse intended by Pelosi was “an area that matches a person's skills or expertise.”

Our Antedating of the Week: 'talking point'

Talking point is our antedating of the week. We define this term as either “something that lends support to an argument” or “a subject of discussion,” and our earliest record of use had previously come around 1914. Recent findings show it in use in the middle of the 19th century.

For more than five years have we relied upon such facts for the reputation of our Machine; and without a single traveling agent in the field, there is scarcely a neighborhood on the continent where the Machine is not favorably known. We prefer such a reputation to one based on mere “talking points,” as they are technically called in the trade.
— Cedar Falls Gazette (Cedar Falls, IA), 29 Aug. 1862