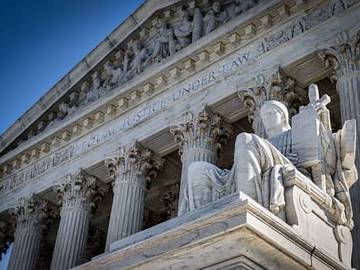 The recent passing of Supreme Court Justice Ruth Bader Ginsburg sent a number of words spiking in lookups, including SCOTUS, dissent, and tzaddik.

How the Timeline for Confirming Trump’s SCOTUS Nominee Will Play Out
— (headline) New York Magazine, 22 Sept. 2020

Author and book critic Ruth Franklin quickly captured the sentiment in a tweet shared thousands of times and liked by more than 200,000: “According to Jewish tradition, a person who dies on Rosh Hashanah, which began tonight, is a tzaddik, a person of great righteousness. Baruch Dayan HaEmet.”
— Josefin Dolsten, Jewish Telegraph Agency, 22 Sept. 2020

SCOTUS is, as most of you know, the supreme court of the United States, an acronym that is often used like a nickname. It is the oldest of the -OTUS (“of the United States”) abbreviations, preceding POTUS, VPOTUS, and FLOTUS. SCOTUS has been in use since the 1870s, and is first found used in a telegraph operators code book.

Dissent can be traced to the Latin dissentire, which itself is from dis- and sentire (“to feel“). As a verb the word means “to withhold assent or approval” or “to differ in opinion.” The noun sense that is most relevant to Justice Ginsburg is the legal one, “a justice's nonconcurrence with a decision of the majority” (also called dissenting opinion).

Tzaddik is a variant of the word zaddik, defined as either “a righteous and saintly person by Jewish religious standards,” or “the spiritual leader of a modern Hasidic community.” The word comes from the Yiddish tsadek, which is from the Hebrew ṣaddīq, meaning “just, righteous.”

Also in the news this week was virtually, after President Trump stated that Covid-19 “affects virtually nobody.”

President Trump was speaking at a rally in Ohio on Monday evening when he said the coronavirus "affects virtually nobody." On Tuesday, the U.S. reached the grim milestone of 200,000 COVID-19 deaths.
— Caitlin O’Kane, CBS News, 22 Sept. 2020

We define virtually as “almost entirely; nearly” or “for all practical purposes.” The word has been in use in English since the 15th century, and we have never attached a specific numeric value to it.

Aerosolize was another of the words in the news last week, following possible new information from the CDC about the possible spread of coronavirus.

The Centers for Disease Control and Prevention on Monday walked back information posted on its website just three days ago, which stated the coronavirus can spread through aerosolized droplets. The CDC now says that Friday's guidance was posted "in error," and that new information will be issued shortly.
— Erika Edwards, NBC News, 21 Sept. 2020

We define aerosolize as “to disperse (something) as an aerosol : to convert or form into an aerosol.” The word is a recent addition to English, in use only since 1944.

Anarchist and jurisdiction, a somewhat unlikely pair of words, also spiked in lookups last week, after the Department of Justice designated three cities (New York, Portland, and Seattle) as meriting this label.

An anarchist is “a person who rebels against any authority, established order, or ruling power” or “a person who believes in, advocates, or promotes anarchism or anarchy.” This latter sense is especially used to describe one who uses violent means to overthrow the established order. Anarchy comes from the Greek an- (“not, without”) and -archos, derivative of archós (”leader, chief”). Jurisdiction in this case may be defined as “the limits or territory within which authority may be exercised.” This word may be traced to the Latin jus (“right, law”) and dictio (“act of saying”).

Our Antedating of the Week: 'zaddik'

Our antedating of the week is zaddik, the original form of the aforementioned tzaddik. Our earliest record had previously been in 1873, but recent findings show zaddik in use as early as the 1820s.

My father attributed my recovery to the intercession of a celebrated Rabbi, and Zadik, to whom he gave a silver goblet, under a promise to use it at his table on Sabbath days, and to remember me in his prayers.
— New York Religious Chronicle, 10 Apr. 1824