Some of the words that defined the week ending September 18, 2020 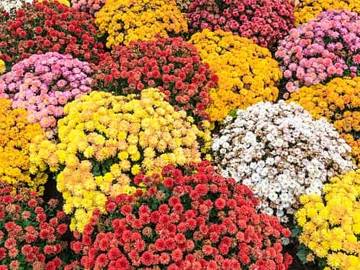 The title of this photo is "Chrysanthemums in Autumn."

Our entry in the ‘this-is-not-a-happy-word-in-this-setting’ category is hysterectomy. The word spiked in lookups last week following reports that ICE officials were accused of performing thousands of non-consensual hysterectomies.

We define hysterectomy as “surgical removal of the uterus.” The word came into English in the later 19th century, from International Scientific Vocabulary; it can be traced to the Greek words hystera (“womb”) and ektemnein (“to cut out”).

Moving on to cheerier topics, blood on one’s hands received considerable attention this week, after a data scientist recently fired by Facebook said that their work for the technology company had resulted in harm felt around the world.

We categorize this as an idiom, and define it as “used to say that someone is responsible for someone else's death.”

Leave of absence was also among our top lookups, after HHC spokesman Michael Caputo announced that he would be taking one, following remarks felt by some to be uncalled for.

Michael Caputo, the top spokesperson for the Department of Health and Human Services and a longtime ally of President Trump's, is taking a 60-day leave of absence after a social media tirade in which he falsely accused government scientists of engaging in “sedition.”
— Pien Huang, National Public Radio (npr.org), 16 Sept. 2020

“There are scientists who work for this government who do not want America to get well, not until after Joe Biden is president,” he continued. “To allow people to die so that you can replace the president is a grievous venial sin, venial sin. And these people are all going to hell.”
— Tarisai Ngangura, Vanity Fair, 14 Sept. 2020

A venial sin is “a sin that is relatively slight or that is committed without full reflection or consent and so according to Thomist theology does not deprive the soul of sanctifying grace” or “a minor offense.” It should not be confused with mortal sin, which is defined as “a sin (such as murder) that is deliberately committed and is of such serious consequence according to Thomist theology that it deprives the soul of sanctifying grace.” The word venial, when unaccompanied by the word sin, means “forgivable” or “pardonable.” It is often confused with venal, which means “originating in, characterized by, or associated with corrupt bribery” or “purchasable.”

Another pair of words that are occasionally confused are herd immunity and herd mentality, as President Trump appeared to do last week.

At a town hall hosted by ABC on Tuesday, the president contradicted himself, claiming – falsely – that he had in fact “up-played it, in terms of action.” Trump also said repeatedly that the virus would ultimately go away thanks to “herd mentality”. It was unclear whether he meant to say “herd immunity”.
— Tim Walker, The Guardian (London, Eng.), 16 Sept. 2020

Herd mentality is “the tendency of the people in a group to think and behave in ways that conform with others in the group rather than as individuals”; herd immunity is “a reduction in the risk of infection with a specific communicable disease (such as measles or influenza) that occurs when a significant proportion of the population has become immune to infection (as because of previous exposure or vaccination) so that susceptible individuals are much less likely to come in contact with infected individuals.” Both came into use in the first quarter of the 20th century.

Comments made by Alexander Vindman about President Trump caused a spike in lookups for useful idiot.

A useful idiot is “a naive or credulous person who can be manipulated or exploited to advance a cause or political agenda.” The term has been in use since 1864, but became much more common during the Cold War.

He called Socialist Leader Pietro Nenni, who is co-operating with the Communists, the “No. 1 useful idiot assisting Communist aspirations to control Italy.”
— San Francisco Examiner, 6 Apr. 1948

Our Antedating of the Week: 'indoctrinate'

Our antedating of the week is indoctrinate, because it seems like someone is always trying to indoctrinate someone or other. The word is now most commonly used in the sense “to imbue with a usually partisan or sectarian opinion, point of view, or principle”; its earliest meaning, however, was “to instruct especially in fundamentals or rudiments.” This teaching sense was thought to have originated in 1626, but recent findings show that it has been is use since at least 1620.

Loe wee sweare vnto you, that you had still remained in your rest and quietnesse, if omitting these publike, you had conteined your selues in your owne private matters, and in the meane time (being so busied) had better indoctrinated the children.
— A relation of the late iourney of the Iesuites, banished out of the kingdomes of Bohemia and Hungaria, 1620