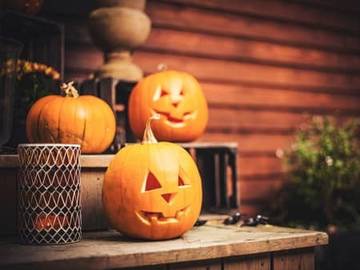 Treat yourself to a scary movie this weekend.

Antitrust pushed past most of its competitors in our lookups last week, after it was announced that Google was being subjected to a lawsuit of this nature.

We define antitrust as “of, relating to, or being legislation against or opposition to trusts or combinations,” with the specific meaning of “consisting of laws to protect trade and commerce from unlawful restraints and monopolies or unfair business practices.” A person who advocates or enforces antitrust provisions of the law is an antitruster.

End-time, a word that is useful for those who aren’t sure how to spell Ragnarok or Armageddon, was on the minds of many people last week, after Pat Robertson averred with great certainty that such a thing was drawing nigh.

We define “the time of the prophesied end of the world; Armageddon.” Merriam-Webster has no further information as to the exact time and circumstances of this event.

Occupation trended in lookups last week, following news reports that lawyers for musician Phil Collins had used the word in referring to his ex-wife’s position in his home.

“Phil Collins wants to end ex wife’s ‘armed occupation’ of his mansion.” This has been quite a week for combinations of words that I never expected to see. https://t.co/e4QKUhgiTj

Occupation comes from the Latin occupāre, meaning "to grasp, take possession of, fill up (space, a position).” Among the word’s earliest meanings in English, dating from the 14th century, are some that are quite close in meaning to this root, including “the act or process of taking possession of a place or area.” Additional meanings of occupation that relate to such possession as “the holding and control of an area by a foreign military force,” and “the military force occupying a country or the policies carried out by it.”

Mute attracted a fair amount of attention (and derision) last week, after Jeffrey Toobin, writer for The New Yorker and commentator for CNN, was observed in flagrante delicting himself on a Zoom call; Toobin later said that he thought he had muted the video.

He added: “I apologize to my wife, family, friends and co-workers. I thought I had muted the Zoom video, I thought no one on the Zoom call could see me.”
— The Guardian (London, Eng.), 19 Oct. 2020

We currently define the uses of mute, as a verb, in the following two ways: “to muffle, reduce, or eliminate the sound of,” and “to tone down; soften, subdue.” We have no evidence at this time indicating that mute has become established in reference to cessation of a video feed.

Also trending as a result of the Toobin episode was Occam’s razor, after Atlantic writer Conor Friedersdorf employed the word in describing the situation; a number of people found this use inapt.

When Occam's Razor suggests someone humiliated himself through a combo of technological error, pandemic circumstances, bad judgment, & bad luck, it seems like we should react w/ empathy, politeness, & forgiveness, as we would want to be treated, rather than punitive mockery

Occam’s razor (which is also occasionally found as Ockham’s razor) is defined as “a scientific and philosophical rule that entities should not be multiplied unnecessarily which is interpreted as requiring that the simplest of competing theories be preferred to the more complex or that explanations of unknown phenomena be sought first in terms of known quantities.” There are a number of common ways of simplifying (some would say oversimplifying) this; among the most common is “broadly: the principle that the simplest explanation is the most likely to be true.”

Our Antedating of the Week: 'back-scratching'

Our antedating of the week is back-scratching, defined as “the reciprocal exchange of favors, services, assistance, or praise.” Our earliest record of use had come in 1882, but recent findings show that we’ve been engaging in backscratching since at least 1869.

…yet these small societies (however good in their way), where but little honour attaches to those who may obtain a prize or two against a few competing neighbours, are little thought of by those who reside in the localities where they are held, and are not altogether popular with the farmers themselves, who look upon them as being little more than good opportunities for enjoying a social dinner, and the indulgence of a little “back-scratching” amongst each other.
— The Nottinghamshire Guardian (Nottingham, Eng.), 29 Oct. 1869