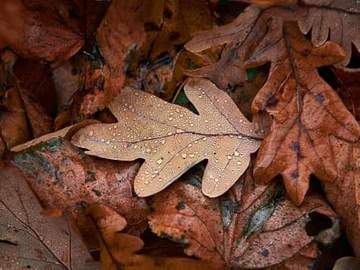 Last Sunday saw Hail Mary spike dramatically in lookups, after a football player for one team managed to catch a long pass in dramatic fashion, while being heavily guarded by members of another team.

DEANDRE HOPKINS CATCHES THE HAIL MARY FOR THE WIN! 🚨

The original meaning of Hail Mary, dating in use from the 14th century, is “a Roman Catholic prayer to the Virgin Mary that consists of salutations and a plea for her intercession.” This comes from the translation of the Medieval Latin Ave, Maria, the opening words of the prayer. The football sense (which, it should be noted, has extended into figurative use, and need not be restricted to the gridiron), may be defined as “a long forward pass in football thrown into or near the end zone in a last-ditch attempt to score as time runs out.” This use is considerably more recent, dating only from the middle of the 20th century.

McFadden—a great actor in the huddle—is willing to call any play from a straight line buck to a “Hail Mary” pass with never a thought of the second-guessers.
— The Tampa Bay Times (St. Petersburg, FL), 31 Dec. 1940

When pluralizing this term, whether in ecclesiastical or other fashion, the correct form is Hail Marys, and not Hails Mary or Hail Maries. It also is found, albeit less commonly, as Hail Mary pass, in which case the plural form would be Hail Mary passes.

Twitter took an adjective (which was probably descended from a verb) and turned it into a noun, in this week’s most overt example of forced functional shift. The word in question is fleet.

Twitter has launched a new feature worldwide called ‘fleets’: tweets that disappear after 24 hours, similar to the stories feature on Snapchat and Instagram.
— Reuters, 18 Nov. 2020

Fleet already exists as a noun, of course, commonly used in the sense of “a number of warships under a single command; specifically, an organization of ships and aircraft under the command of a flag officer.” As an adjective it may mean “swift in motion” or “passing swiftly, transitory.” Other adjectives which have similar meanings (lasting a short period of time) include fugacious, evanescent, and deciduous.

Opacity finally had its day in court, after Rudy Giuliani, lawyer for President Trump, revealed in court that he was unaware of the word’s meaning.

When describing poll observers having been prevented from adequately observing the polls, he stated, “They were denied the opportunity to have observation and ensure opacity.” The judge sought to clarify that opacity means a lack of transparency, rather than transparency. “I’m not quite sure I know what opacity means,” Giuliani said. “It probably means you can see. These are big words, Your Honor.”
— Jeremy Stahl, Slate, 18 Nov. 2020

We would like to take this opportunity to say that there is nothing wrong with not knowing a word. If everyone knew all the words, or even just pretended that they did, our role in public discourse would diminish considerably. Our job is to provide information on words, not to provide jeers. For those who do not know the meaning of opacity, we offer the following definitions:

1a: obscurity of sense : unintelligibility
1b: the quality or state of being mentally obtuse : dullness
2: the quality or state of a body that makes it impervious to the rays of light broadly : the relative capacity of matter to obstruct the transmission of radiant energy
3: an opaque spot in a normally transparent structure (such as the lens of the eye)

Orwellian also came into the news last week, after a member of President Trump’s administration used it in an appearance on television.

White House press secretary Kayleigh McEnany on Wednesday called state restrictions meant to slow the spread of coronavirus around Thanksgiving "Orwellian" even as she acknowledged the Trump administration has ceded power to the governors to impose such measures. "A lot of the guidelines you’re seeing are Orwellian," McEnany said in an appearance on "Fox & Friends.”
— Brett Samuels, The Hill, 18 Nov. 2020

Also trending in lookups last week was subvert, after The New York Times used the word in alleging that this is what President Trump was attempting to do to the Electoral College process.

After failing repeatedly in court to overturn election results, President Trump is taking the extraordinary step of reaching out directly to Republican state legislators as he tries to subvert the Electoral College process, inviting Michigan lawmakers to meet with him at the White House on Friday.
— The New York Times, 19 Nov. 2020

Subvert comes from the Latin subvertere (literally, “to turn from beneath”), and has been in use in English since the 14th century. The word has a number of possible meanings, including “to overturn or overthrow from the foundation,” “to pervert or corrupt by an undermining of morals, allegiance, or faith,” and “to bring to nothing, destroy, or greatly impair the existence, sovereignty, influence, wholeness of especially by insidious undermining.”

Our Antedating of the Week: 'shyster'

Our antedating of the week is shyster, defined as “a person who is professionally unscrupulous especially in the practice of law or politics.” The word is believed to have come from the German word Scheisser, which literally means “defecator.” Our earliest known use had come in 1844; recent findings show that it was in fact in use in late 1843. A single use of the word, found in a work from 1586, appears to be orthographically identical, but semantically distinct.

Even so, a plaine minded man using these deceitful houses, is an assured praye for al sortes of shysters.
— George Whetstone, The enemie to unthryftinesse publishing, by lawes, documents and disciplines, 1586

Finally some of “the boys” declared they would go and see what the “shysters,” as they called the committee men, were about, which term they introduced with some half a dozen most complimentary oaths.
—Commercial Advertiser (New York, NY), 12 Oct. 1843

Why does not some one compel Whiting the jury-packing shyster, to prosecute one-eye Thompson, his croney and aid-de-camp, on the six indictments for burglary, upon which he dishonestly entered “nol proseques,” at the solicitation of Matsell, Stokely, and a number of other rogues, blackguards and vagabonds, without consulting the Court, and in direct opposition to the wishes of each and every one of the prosecutors.
— The Subterranean, (New York, NY), 2 Dec. 1843