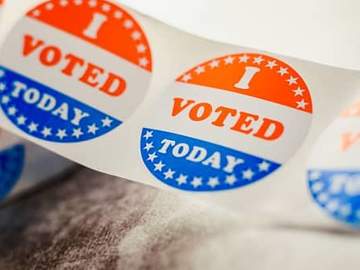 You might sense a slight theme to the week.

Gambit was on the minds of a large number of people who either love watching chess-based dramas, wanted to tune out the US presidential election, or both.

Gambit comes from from the Italian gambetto (literally, "act of tripping someone”), which comes from gamba (“leg”), a word that goes back to Late Latin. The earliest use of gambit in English, going back to the middle of the 17th century, pertains to chess: “a chess opening in which a player risks one or more pawns or a minor piece to gain an advantage in position.” The word has taken on additional meanings since then, including “a remark intended to start a conversation or make a telling point” and “a calculated move; a stratagem.” Here ends the non-election word coverage for the week.

Cusp has been a word seemingly on the edge of every journalist’s mind for most of the week, as the contest between Joe Biden and Donald Trump remained too close to call.

The word comes from the Latin cuspis, meaning “point.” Among the meanings of cusp are “point, apex,” especially “a point of transition (as from one historical period to the next).” The word may also mean, as used in thousands of headlines and articles this week, “edge, verge.”

Nail-biter has been vying with cusp for ‘word you are most likely to see in the headlines’ this week.

We define nail-biter as “something (such as a close contest) that induces tension or anxiety.” Before the word had this figurative use, it was often found employed literally, in reference to a person who bites their nails (this use was sometimes strikingly judgmental).

If you need a fancier word for the the literal biting of nails you can use onychophagia; an onychophagist is a nail-biter.

Contested election was among our top lookups this week, which should come as no surprise, as we are currently in the midst of an election that is being contested.

Trump appointed Amy Coney Barrett as Supreme Court justice just days before the election, creating a 6-3 conservative majority that could favour the president if the courts weigh in on a contested election.
— Al Jazeera, 4 Nov. 2020

A contested election is “an election of which the legality or validity of the result is challenged by the losing candidate.” This use is formed with the past participle of the verb sense of contest that is defined as “to make the subject of dispute, contention, or litigation.” Related to this verb sense are a number of nouns which may prove useful in the weeks ahead, including contestee (“one whose election is contested”) and contestant (“one that contests an award or decision”). There is are the word contestation (“an act or instance of contesting”), which should not be confused with the similar-looking contentation (“state of contentment,” “whatever makes one content”).

A little-used (outside of the legal world) sense of cure took on much greater significance last week, following numerous news reports on the curing of ballots.

At least three more lawsuits have been filed by Republicans challenging the eligibility of certain votes cast and "cured" in Pennsylvania.
— Nydia Han and Heather Grubola, _6ABC.com, 4 Nov. 2020

Cure has a variety of specific legal meanings. Several of these transitive ones deal with dealing with something in a way that eliminates or corrects, such as “to use judicial procedures to undo (damage to a litigant's case caused by procedural errors made during a trial),” “to correct or make acceptable (a defective performance or delivery under a contract),” and “to negate (a default by a debtor in bankruptcy) by restoring the debtor and creditor to their positions before the default.” The verb may also function in an intransitive manner, with the meaning “to eliminate or correct a defect.”

Following what has been an unusually acrimonious election, some are calling for a nationwide reconciliation.

Reconciliation has a distinct political meaning in the US, one that has occasionally spiked in lookups over the past few years: “a legislative process that enables expedited passage of a bill relating to certain matters in the federal budget by a simple majority of votes.” The sense that has been called for recently, however, is the earlier meaning of the word: “the action of reconciling (restoring to friendship or harmony).”

Our Antedating of the Week: 'nail-biter'

Our antedating of the week is the aforementioned nail-biter. Our earliest known use in the metaphorical sense had previously come in 1950. Recent findings show that we had anxiety-producing nail-biters at least a decade earlier.