Some of the words that defined the week of November 1, 2019 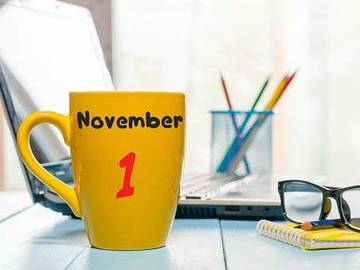 We hope this soothes your candy hangover.

Many people turned to a dictionary last week to see if a new meaning of austere had entered the language, after the Washington Post used the word in describing a man who many felt was better described by any one of thousands of other adjectives.

The Washington Post is facing backlash after publishing a headline that characterized the Islamic State leader who was killed in a U.S. raid over the weekend as an "austere religious scholar." The headline was quickly changed, but critics say it skimmed over the terror inflicted by Abu Bakr al-Baghdadi.”
— Yahoo News, 28 Oct. 2019

Austere comes from the Greek austēros, meaning “harsh, severe.” Since the word’s entry into English in the 14th century it has taken on a number of extended meanings, including “stern and cold in appearance or manner,” “somber, grave,” “morally strict,” “markedly simple,” and “giving little or no scope for pleasure.” While one or more of these may indeed have been applicable to the deceased leader of the Islamic State it was widely felt to have been an infelicitous choice of words.

Boomer (which may serve either as a clipped form of baby boomer as the word for “one who booms,” depending on your need) was much in the news last week as the result of media coverage of the current deprecatory statement made by younger people to older people.

“Ok boomer” has become Generation Z’s endlessly repeated retort to the problem of older people who just don’t get it, a rallying cry for millions of fed up kids. Teenagers use it to reply to cringey YouTube videos, Donald Trump tweets, and basically any person over 30 who says something condescending about young people — and the issues that matter to them.
— Taylor Lorenz, The New York Times, 29 Oct. 2019

Baby boomer refers to a person born in a time when there is a marked increase in population; the word is especially used to describe people born in the U.S. between 1946 and 1964. It has been in use since the early 1960s.

Words from the Vindman Testimony

Testimony given by Alexander Vindman to the House of Representatives impeachment inquiry caused surges in lookups for an incongruous trio of words: Purple Heart, chickenshit, and ellipsis.

Trump’s Defenders Are Now Attacking the Patriotism of a Purple Heart Officer
—(headline) The Atlantic, 29 Oct. 2019

We define Purple Heart as “a U.S. military decoration awarded to any member of the armed forces wounded or killed in action.” Vindman, the director of European Affairs at the National Security Council, is an officer in the U.S. Army, and has a Purple Heart for wounds received in the Iraq War. This decoration began to be awarded in 1932; there was an earlier kind of Purple Heart, instituted by George Washington, awarded to soldiers who had displayed valor in battle.

It may be interesting to note in this connection that the first decoration for valor in this country was instituted in 1782 by General Washington, who was himself the first American to be decorated by the Continental Congress for his services during the siege of Boston. The decoration thus established was know as the “Honorary Badge of Military Merit,” and consisted of the figure of a heart in purple cloth or silk edged with narrow lace or binding, to be worn on the facings over the left breast.
— F. Senter Frisbie, The American Historical Register and Monthly Gazette of the Historic, Military and Patriotic-Herditary Societies of the United States of America (Philadelphia, PA), Sept. 1894

Chickenshit made a rare appearance in televised speech when MSNBC anchor Nicolle Wallace used the word to describe Laura Ingraham, John Yoo, and Sean Duffy, who she felt were unfairly questioning the patriotism and motives of Vindman.

Wallace played the clips showing the “smear campaign,” and in response to Yoo’s comment that “some people might call that espionage,” she said, “Except those people aren’t chickenshit like the three of you and they know that he passed a background check that the president’s daughter and son-in-law didn’t.”
— Josh Feldman, Mediaite (mediaite.com), 29 Oct. 2019

This word may function as either adjective or noun. In the manner in which Wallace used it chickenshit is an adjective, meaning “weak and cowardly” (it may also mean “petty or insignificant”). As a noun it may mean “a coward” or “the petty details of a duty or discipline.” When it first began being used in published text (1940s) it was occasionally found as an open compound (chicken shit), or hyphenated (chicken-shit). In current use it most often is written as a closed compound (chickenshit). However, the careful writer should note that when referring to the excreta of the common domestic fowl (Gallus gallus), the open compound is standard.

In his testimony Vindman made reference to a series of ellipses found in the transcript of a telephone call between President Trump and Ukrainian President Volodymyr Zelensky.

There were some unusual features of the document. It included three incidents of ellipses that seemed to omit what was said, all while Trump was speaking about those investigations.
— Andrew Prokop, Vox (vox.com), 30 Oct. 2019

Ellipses is the plural of ellipsis, defined as “marks or a mark (such as … ) indicating an omission (as of words) or a pause.” The word comes from the Greek elleipein, meaning “to leave out, fall short.”

Our Antedating of the Week: 'gangbuster'

For our antedating of the week we are looking at gangbuster, “one engaged in the aggressive breakup of organized criminal gangs." The earliest record we previously had for this word came in 1930, but recent findings show that it was in (somewhat whimsical) use as far back as 1904.

The bi-ennial political game between the gangsters and the gang-busters is now on. The gangsters are a favorite in the betting at odds of 1,000,000 to a whisker.
— The Guthrie Daily Leader (Guthrie, OK), 28 Jul. 1904