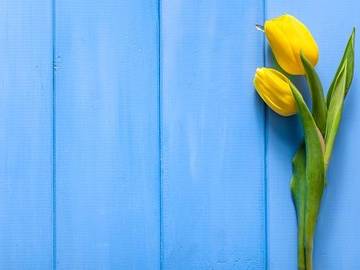 Some flowers for you.

The announcement by the Department of Justice that they were planning on dropping charges against former national security adviser Michael Flynn once more brought about interest in a matter of national importance: is it pled or pleaded?

Flynn pleaded guilty to lying to FBI agents in December 2017 and agreed to cooperate.
— Chris Strohm, Bloomberg Wire Service, 7 May 2020

Plead (“to make a plea of a specified nature”) has a past and a past participle with a short vowel (pled). However, the word pleaded has also long been in use for the same functions, especially in British English. While some usage guides of yore have cautioned against using pled, both forms are now entirely standard, in both legal and non-legal use.

Valet was also much in the news at the end of the week, following reports that the President’s gentleman’s gentleman had tested positive for COVID-19.

A personal valet for President Donald Trump, who among other things serves meals to the president, has tested positive for the coronavirus, but a White House spokesman said Thursday that Trump and Vice President Mike Pence have since tested negative.
— Dan Mangan, Yelena Dzhanova, and Christina Wilkie, CNBC (cnbc.com), 7 May 2020

The relevant sense of valet is “a man's male servant who performs personal services (such as taking care of clothing),” although the word also carries meanings such as “an employee (as of a hotel or a public facility) who performs personal services for customers” and “a device (such as a rack or tray) for holding clothing or personal effects.” Valet may be pronounced two different ways, rhyming either with ballot or with ballet.

Llama was surging in lookups as well, for the first time since we’re not sure when, after the animal was rumored to potentially have great potential in a treatment for the coronavirus.

Winter is a 4-year-old chocolate-colored llama with spindly legs, ever-so-slightly askew ears and envy-inducing eyelashes. Some scientists hope she might be an important figure in the fight against the novel coronavirus.
— Jillian Kramer, The New York Times, 6 May 2020

Llamas are wild or domesticated South American ruminant mammals, related to camels but without a hump. The word came into English from Spanish, which took it from Quechua (a family of languages spoken by Indian peoples of Peru, Bolivia, Ecuador, Chile, and Argentina).

Fatigue has been showing up in all sorts of places lately, particularly in the sense we define as “a state or attitude of indifference or apathy brought on by overexposure (as to a repeated series of similar events or appeals).”

The researchers are examining the phenomenon called “Zoom fatigue,” an array of physical and psychological factors that combine to make our synchronous online communications less effective and wrought with discomfort.
— Ray Schroeder, Inside Higher Ed, 6 May 2020

This sense of fatigue is one of the newer ones, in use since the beginning of the 20th century.

Repetition breeds indifference; and the initiative, in particular, may be said to have created a new political disease, a sort of electoral fatigue, which through the repeated votes upon a given question forced by a small percentage of the voters results in what is virtually a government by minorities.
— The Californian (Salina, CA), 11 Nov. 1914

Our Antedating of the Week: 'isolate'

For our antedating of the week we are looking anew at isolate (“to set apart from others”), a word which has had an unfortunate significance for many over the past few weeks. Our earliest known use had previously come in 1799; recent findings show that the word was in use at least four years prior to that, in the translation of an 18th century French philosophical treatise on chemistry. The text is every bit as racy and exciting as one would imagine an 18th century French philosophical treatise on chemistry would be.

Hydrogen and carbon, very intimately united together in the capillary tubes of vegetables, and frequently containing small portions of earth, alkalies, acids, and especially oxygen, from bitumens, oils, resins, which, though they have a tendency to burn and separate, preserve some time the equilibrium of their combination, till a rapid increase of temperature, accompanied with the contact of air or water, puts an end to this equilibrium, by isolating their elements, and uniting them separately with oxygen.
— Antoine-François de Fourcroy, The philosophy of chemistry, 1795