Some of the words that defined the week ending May 1, 2020 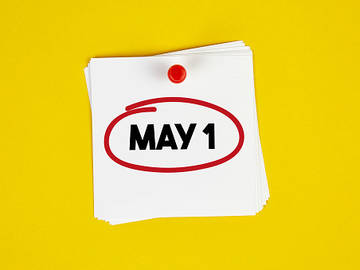 Sycophant had another spike in lookups (it happens with this word once a year or so) when Jennifer Rubin, a columnist for The Washington Post, used the word in reference to the Vice-President.

Why would Pence act so recklessly, putting himself and caregivers in further danger? Well, Trump does not like the idea of wearing a mask so a sniveling sycophant probably wouldn’t want to be seen in one, either.
— Jennifer Rubin, The Washington Post, 29 Apr. 2020

We define sycophant as "a servile self-seeking flatterer." Servile means “meanly or cravenly submissive” or “of or befitting a slave or a menial position.” The word has been in use since the early 16th century.

Agaynst the byting of a sycophaunt or sclaunderer there is no remedy.
— Philipp Melanchthon, The confessyon of the fayth of the Germaynes, 1536

Some of you may be curious about the other descriptor employed by Rubin, sniveling. Please note that the verb snivel (a word with a lovely range of disagreeable meanings, including "to snuff mucus up the nose audibly," "to cry or whine with snuffling," and "to speak or act in a whining, sniffling, tearful, or weakly emotional manner") may be conjugated with either a single or a double L (sniveling or snivelling; sniveled or snivelled).

Joe Biden said something last week that made some people furrow their brows, and caused others to snigger and guffaw, when he made reference to economic intercourse.

One of the definitions we offer for the word intercourse is "connection or dealings between persons or groups." This is a noun, and Biden was modifying it with the adjective economic. It is not terribly uncommon, and not at all risque, to pair these two words together.

UFOs were on the minds of many people last week, following the release of what was said to be evidence of such objects.

UFO is an abbreviation of unidentified flying object. Some people would insist that this word is an initialism, "an abbreviation formed from initial letters" (such as CIA or FBI). If you want to describe UFO as an acronym that's fine as well. Acronym may refer either to a word formed from the initial letter or letters of each of the successive parts or major parts of a compound term (such as NATO), and also is used synonymously with initialism.

Famotidine found itself in the news far more than it usually is, following reports that it was being considered as a possible treatment for COVID-19.

Some words have definitions that raise brevity to an art form, such as purdy ("disagreeably self-important"), and then there are other words which require a little more verbiage. Famotidine is in the second category; we define it as "an H2 antagonist C8H15N7O2S3 used to inhibit gastric acid secretion especially in the short-term treatment of gastric and duodenal ulcers and gastroesophageal reflux disease and in the treatment of disorders (as Zollinger-Ellison syndrome) involving gastric acid hypersecretion."

Trump claims his tweets about 'Noble Prizes' were 'sarcasm' in day of erratic tweeting
— (headline) The Week (theweek.com), 27 Apr. 2020

The Nobel Prize (also referred to simply as Nobel) is "any of various annual prizes (as in peace, literature, medicine) established by the will of Alfred Nobel for the encouragement of persons who work for the interests of humanity." Alfred Bernhard Nobel (1833-1896) was a Swedish manufacturer, inventor, and philanthropist. The word noble, which comes from the Latin nobilis ("well-known, noble"), has a range of meanings that include "possessing outstanding qualities," "of high birth or exalted rank," and "chemically inert or inactive especially toward oxygen."

Our Antedating of the Week: 'scuttlebutt'

For our antedating of the week we are looking anew at scuttlebutt, a word which now means “rumor, gossip.” This sense came about around the beginning of the 20th century; the original meaning of scuttlebutt was “a cask on shipboard to contain fresh water for a day's use” (the word is an alteration of scuttled butt, or a butt (“a large cask especially for wine, beer, or water”) with a hole cut into it). Our earliest known use of scuttlebutt had previously come from around 1805; recent findings show that the word was in use at least as far back as 1798.

Instead of an allowance therefore being served out daily, the scuttle butt should never be allowed to be empty; (unless for the purpose of cleaning it) and every man should be permitted to take as much water as he has occasion for, the officer on deck taking care, at the same time, that none be wantonly spilled or wasted.
— Alexander Stewart, Medical Discipline, 1798