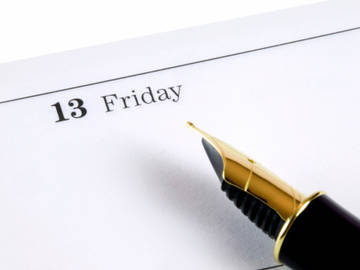 'Triskaidekaphobia': fear of the number 13

This past week saw a skyrocketing increase in the combination of the words abundance and caution.

Lindsey Graham will self-quarantine out of “an abundance of caution,” his office says. “Senator Graham was at Mar-a-Lago last weekend. He has no recollection of direct contact with the President of Brazil, who is awaiting results of a coronavirus test, or his spokesman”

We do not provide a definition for abundance of caution, as it is self explanatory from its constituent parts. The relevant sense of abundance is “profusion,” and that of caution is “prudent forethought to minimize risk.” The combination of these two words is hardly new; we’ve been using them together for at least 400 years now.

That he most carefully doth conduct the soule, which he instructeth in the way of spirit; accompanying his discourse with aboundance of caution; so to saue his Reader from sliding into any extreme; and being no lesse sollicitous, to guide him straight, then a tender mother, or nurse would be, to lead her only child, by the sleeues or armes, for feare least otherwise he might take a fall.
— Saint John of Avila (trans.), The audi filia, 1620

Bear market tumbled into our top lookups last week, as the continued decline in the stock market made this financial term relevant in a way it has not been for a decade or so.

It’s the end of a bullish era for the stock market and the beginning of a new phase of bearishness, after a sharp plunge for risk assets on Wednesday pushed the Dow Jones Industrial Average into bear-market territory for the first time in more than a decade.
— Mark DeCambre, MarketWatch (marketwatch.com), 12 Mar. 2020

The features of the Stock market are much the same as those of the last day or two. There was some irregularity in the movement, but on the whole it was a bear market.
— The New York Daily Tribune, 24 Sept. 1858

Boris Johnson, Prime Minister of the United Kingdom, last week used efficacity, an obscure synonym of efficacy (“the power to produce an effect”).

Efficacity is certainly a word, and has been in use since the 15th century. Its use is not restricted to British politicians; American ones use it as well, as shown by this declassified document from the Lyndon Baines Johnson White House.

However, while reservations were expressed as to the efficacity of any voluntary appeal, the Department supported it with the understanding that the Western Hemisphere be exempted.
— White House, Johnson Administrative History of the Dept. of State, Vol. I: Strengthening the International Monetary System, (no date) declassified 5 Dec. 1983

Presumptive, a word that apparently applies with equal facility to presidential candidates and pathogens, was also much in the news last week.

Before polls closed on the west coast, Biden had been declared the “presumptive nominee” and the “prohibitive” favorite by most pundits.
— Lauren Gambino, The Guardian (theguardian.com), 11 Mar. 2020

Presumptive has been in consistent use since the 15th century. The word comes from the Latin praesumptus (which is the past participle of praesumere, "to anticipate, suppose, take in advance"), and the initial sense in which it was used is one that still has considerable currency today: "based on probability or presumption."

A number of people found themselves turning to their dictionaries in search of confirmation that obscene meant what they thought it did, after the attorney for Harvey Weinstein used the word in reference to his prison sentence.

We offer the following definitions as senses of the word: “disgusting to the senses,” “abhorrent to morality or virtue,” “containing or being language regarded as taboo in polite usage,” “repulsive by reason of crass disregard of moral or ethical principles,” and “so excessive as to be offensive.” Some may find one of these senses applicable to Weinstein’s sentence, and others may find one or more senses applicable to Weinstein himself.

Our Antedating of the Week: 'knucklehead'

For our antedating of the week we are looking at knucklehead (“a stupid person; a dummy”). While our earliest evidence for this word had previously been from 1942, recent findings show that we’ve been in the company of knuckleheads since at least 1890.

Stoner, though it was midnight, sat in the moonlight on an old raw-hid (sic) chair, outside the door, smoking his pipe and meditating—a tough, sinewy, grizzled night-owl of a man.”That infernal knuckle-head at the camp ought to have reported before now,” he thought to himself, as he smoked.
— The Durham Recorder (Durham, NC), 8 Oct. 1890