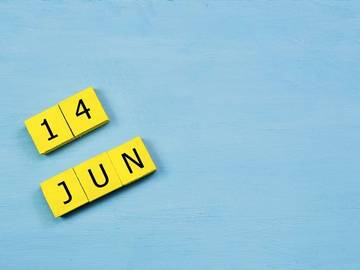 Canadian sporting fans erupted in joy Thursday night this week, as Toronto brought the NBA championship home to the North for the first time. Immediately after their victory, large numbers of people turned to the dictionary, looking up the name of the victorious team, perhaps to learn more about what, exactly, they had been cheering for.

The word raptor may be traced back to the Latin word for "plunderer" (raptor). It may be defined either as "a carnivorous medium- to large-sized bird (such as a hawk, eagle, owl, or vulture) that has a hooked beak and large sharp talons and that feeds wholly or chiefly on meat taken by hunting or on carrion" or "a usually small-to-medium-sized predatory dinosaur." Drake's favorite team employs the latter sense as a mascot.

President Trump sparked a healthy debate on planetary position and ownership last week, when a tweet of his appeared to mischaracterize the relationship that our moon has with Mars.

On Friday afternoon, Trump caused a lot of confusion when he tweeted that “NASA should NOT be talking about going to the Moon” since the agency landed humans on the lunar surface 50 years ago. Instead, “They should be focused on the much bigger things we are doing, including Mars (of which the Moon is a part), Defense and Science!” according to the president.
— Loren Grush, The Verge, 11 Jun. 2019

Here are our definitions for these words:

Moon - often capitalized : the earth's natural satellite that shines by the sun's reflected light, revolves about the earth from west to east in about 29¹/₂ days with reference to the sun or about 27¹/₃ days with reference to the stars, and has a diameter of 2160 miles (3475 kilometers), a mean distance from the earth of about 238,900 miles (384,400 kilometers), and a mass about one eightieth that of the earth —usually used with the

A story in New York City, in which a man driving a car appeared to use his car to attempt to push a bicyclist out of his way, drew considerable attention to the manner in which traffic enforcement officers of that city deal with conflicts between cars and bicycles. What the story did not do was make the word jehu increase in lookups. Which is a shame, as this is one of the few words in English for describing a bad driver (and is often found in the phrase drive like Jehu). Jehu was a king of Israel in the ninth century b.c., and is described in the Bible as driving furiously. His name thus came to be used with the meaning “a driver especially of a cab or coach; specifically, one who drives fast or recklessly.” Please commit this word to your memory, and use it as needed for all such traffic-related stories henceforth.

Existential continued to enjoy the heightened position in our lookups it, oddly enough, has had repeatedly over the past several weeks. At the end of May it was used in reference to the ostensible dilemma of a former Trump staffer regarding whether or not she should testify on some matter. This week existential was spiking either because of its appearance in multiple reviews of a Disney movie, because of advance coverage of a speech to be given by Joe Biden, or from both causes.

Joe Biden called out President Trump as an "existential threat" to the U.S. in a campaign appearance in Iowa Tuesday.
— Bo Erickson, CBS News, (cbsnews.com), 11 Jun. 2019

We may never know for certain whether existential lookups were prompted by Joe Biden or Toy Story 4, but at least when the word eviscerate spiked last we knew it was from Biden, rather than the children’s movie.

CNN’s New Day previewed an advance copy of a stump speech that Joe Biden plans to give during a campaign visit today in Iowa later on Tuesday, and according to the on-screen chyron, the former Vice President will “eviscerate” President Donald Trump.
— Colby Hall, Mediaite, 11 Jun. 2019

Eviscerate comes from the Latin viscera (which in English is also the plural of viscus, meaning “an internal organ of the body”), and has meanings both literal and figurative. The literal sense of eviscerate is “disembowel; to take out the entrails of,” and the figurative sense is “to deprive of vital content or force.”

A report from last month, which found that a very large percentage of men self-identify as having potential boundary issues, continued to draw attention to the word mentor.

A few pointers for the 60% of male managers who now say they're uncomfortable mentoring women
— (headline) Chicago Tribune, 10 Jun. 2019

Mentor comes to English from Homer’s The Odyssey; in this epic poem Mentor was the name of the friend of Odysseus who oversaw the education of Odysseus’ son, Telemachus. We define the word (as a noun) in this classical sense, and also with the meanings “a trusted counselor or guide” and “tutor.” The word may also function as a verb, meaning “to serve as a mentor for; to tutor.”

Our Antedating of the Week: 'hypermasculine'

And in a completely unrelated twist, our antedating of the week is hypermasculine, defined as “extremely or excessively masculine." Until this week our earliest record of use for this word had come in 1909; it now has been moved back to 1907.

Mr Swinburne himself is never at his highest when assuming—it is not his poetic natural manner—a sort of rough hyper-masculine tone.
— George Barlow, The Triumph of Woman, 1907