Some of the words that defined the week ending June 5, 2020 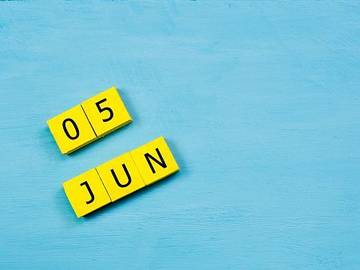 The recent passing of an enormously popular artist who had a penchant for wrapping things in fabric sent lookups for festoon much higher than usual.

As a noun festoon may mean “a decorative chain or strip hanging between two points” or “a carved, molded, or painted ornament representing a decorative chain.” The verb form of the word (which is the use of festoon most often associated with Christo) may be defined as “to hang or form festoons on,” “to shape into festoons,” and “decorate, adorn.” Festoon may be traced to the Latin festa (“festival”), which is also the root of the noun feast.

Unhinged and dominate also were among our most searched words, following the release of an audio recording in which President Trump could be heard giving strongly worded advice to a number of the nation’s governors.

Unhinged, an adjective, is defined as “highly disturbed, unstable, or distraught”; the verb form of unhinge may be defined as either “to make unstable” or “to remove from the hinges.” Unhinged has been used in this manner since the middle of the 17th century.

Our sad Case is now such, That we have an Incensed God; an angry King; a threatning Councell; a heady Clergy; a divided Nobility; a discontented Gentry; a distempered People; a distracted Religion; an unhinged State … a defection from the Principles of sound Policy; a Parliament which should be the Redresse of all these, made quite otherwise, to us, by some that have abused it: and generally such a conspiracy; such a complying of ill Symptomes; that even Miracles must be wrought, or else we perish.
— Thomas Povey, The moderator expecting sudden peace, or certaine ruine, 1643

Dominate, which comes from the Latin word for “master” (dominus), has been around slightly longer; our earliest evidence of use comes in the 16th century, and also appears in a political discussion of governors.

IF we beare the preheminence of a Magistrate, & dominate over others, as rulers and governours of them; it is necessarie that especially we abounde in foure severall points of wisedome.
— Hermannus Schottennius, The governement of all estates (trans.), 1566

Trump also propelled lowlife and scum to the top of our lookups last week, after he posted a remonstrance of Andrew Cuomo, governor of New York, on Twitter.

Trump suggested that violence and looting seen on the streets of New York City on Monday night was the result of the governor’s failure to accept the president’s offer to deploy the National Guard. “Yesterday was a bad day for the Cuomo Brothers. New York was lost to the looters, thugs, Radical Left, and all others forms of Lowlife & Scum,” Trump wrote.
— Dan Mangan, CNBC (cnbc.com), 2 Jun. 2020

Lowlife has been used as an adjective (“of or relating to the world of low social life”) since the early 18th century. The particular noun use that Trump appears to have intended (“a person of low moral character”) is considerably more recent, dating from the beginning of the 20th century.

Scum has been part of our grand English vocabulary since at least the 14th century, and has a much wider range of meaning than people usually give it credit for. It may refer to, among other things, “extraneous matter or impurities risen to or formed on the surface of a liquid often as a foul filmy covering,” “the scoria of metals in a molten state,” and “a low, vile, or worthless person or group of people.” The last time scum was this high in our lookups was way back in 2019, when Trump referred to Republicans who opposed him as human scum.

Bunker was much in the news last week, after the Secret Service was said to have moved President Trump to such a place.

This word has been in use for hundreds of years; early meanings include “a chest or box often used as a window seat” and “a sand trap or embankment with soil exposed constituting a hazard on a golf course.” The bunker that Trump was in last week is defined as “a protective embankment or dugout; especially, a fortified chamber mostly below ground often built of reinforced concrete and provided with embrasures.” This is among the more recent meanings of the word, coming into use in World War II.

Three additional former police officers were charged with aiding and abetting the murder of George Floyd, sending many to the dictionary in search of the precise meaning of this legal term.

We have a rather simple definition for aiding and abetting: “helping and encouraging.” The legal meaning of this idiom varies from state to state, and country to country, making a precise definition for all instances in which it is used impractical. The two words have been used together in this legal manner for a very long time, with evidence of use as far back as the early 17th century.

By our Law the counsailor, commandor, or assistor are without any such difference or limitation as you have made, guiltie of homicide, & principall offendors: for al that be present, ayding, abetting or comforting him that doth murder, are principal offendors though they giue no stroke.
— William Fulbeck, A parallele or conference of the civill law, the canon law, and the common law of this realme of England, 1601

We doe farther declare & protest against this present House of Commons illegall Acts, Order, or Ordinance, for erecting a High Court of Justice, & usurping a power without any Law or president, to Trie, Depose, and bring to capitall punishment the King, and to Dis-inherit His Posterity, or any of them, and against the said Generall Councell of Officers, aiding and abetting them therein, as highly impious against the Law of God, Nations, & the Protestant Profession….
— Clement Walker, Anarchia Anglicana, 1649

Our Antedating of the Week: 'photo op'

For our antedating of the week we are looking at photo op, as this word appears to have been on the minds of many people of late. Photo op is a shortened form of photo opportunity; both may be defined as “a situation or event that lends itself to and is often arranged expressly for the taking of pictures that give favorable publicity to the individuals photographed.” Our earliest known use of photo op had previously come in 1981; recent findings show that the word was in use the year before.

The other was to provide musical introductions to press conferences and photo ops (campaign shorthand for opportunity).
— San Francisco Examiner, 15 Nov. 1980