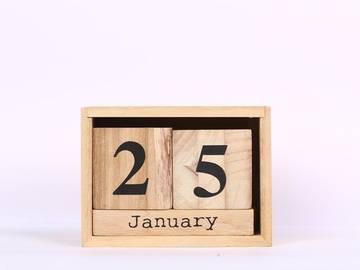 Indictment was once again in the news, following the arrest of Roger Stone. The legal efforts of Special Counsel Robert Mueller have caused this word to spike numerous times over the past year and a half.

Roger J. Stone Jr., a longtime informal adviser to President Trump, was charged as part of the special counsel investigation over his communications with WikiLeaks, the organization behind the release of thousands of stolen Democratic emails during the 2016 campaign, in an indictment unsealed Friday.
— Mark Mazzetti and Eileen Sullivan, The New York Times, 25 Jan. 2019

In the event that you have need of some words which relate to indicting, but which are not indictment, the following may be of some use:

Indictee - one that is indicted

Indictor - one that indicts

Indictable - 1. subject to being indicted 2. making one liable to indictment

A chyron is “a caption superimposed over usually the lower part of a video image (as during a news broadcast).” The word has been in use since 1990, and comes from the name of the Chyron Corporation, the American manufacturer of a character-generating device that created such captions in the 1970’s.

Apoplectic was a word in the news lately, following several news reports attributing this definiendum to President Trump.

Trump was apoplectic after a pair of weekend media interviews by his personal lawyer, in which Giuliani said that the president had been involved in discussions to build a Trump Tower in Moscow through the end of the 2016 campaign — a statement that enraged Trump because it contradicted his own public position, according to two sources close to the president.
— Eliana Johnson and Darren Samuelson, Politico (politico.com), 22 Jan. 2019

The word, which may be traced back to the Greek apoplēssein, which means “to cripple by a stroke.” Apoplectic does have the meanings of “of, relating to, or causing apoplexy or stroke,” and “affected with, susceptible to, or showing symptoms of apoplexy or stroke,” but use of these senses in medical contexts is now largely considered to be dated. The more common meaning of apoplectic in modern parlance is “extremely enraged.”

Michael Cohen's legal advisor on Thursday called for President Donald Trump to be censured by Congress for "witness tampering" one day after Trump's ex-lawyer postponed his congressional testimony due to "threats" against his family by the president.
— Dan Mangan, CNBC (cnbc.com), 24 Jan. 2019

Tamper is believed to come from the Middle French word temprer (“to temper, meddle, mix”). It may be used in reference to objects, rather than people, with the meaning of “to interfere so as to weaken or change for the worse —used with with.” When employed in a legal context the word has two possible senses: “to bring improper influence to bear (as by bribery or intimidation),” and “to alter or interfere in an unauthorized or improper manner.” In both of these cases tamper is typically followed by the word with. The first sense would be more applicable to tampering with jurors, and the second sense more so with evidence.

Our Antedating of the Week: volunteer

For our antedating of the week we are looking at a word which was much in use in the coverage of the ongoing government shutdown. Larry Kudlow attracted a degree of skepticism when he asserted that some of the government workers who have not been paid of late were volunteering.

Larry Kudlow Snaps at Reporter: Federal Workers are ‘Volunteering’ to Work Because of Their ‘Allegiance’ to Trump https://t.co/FfSSdvh4WB pic.twitter.com/O6FpSPHLEz

This word has been in use as a noun since at least the beginning of the 17th century but until recently the verb was thought to have begun in the 18th century. Recent findings show the verb in use as far back as 1637.

My purpose rather is to shew you the originall and ground of this Duell; where and whom it challengeth, and how; that so the nature and qualitie of this warre being discover'd, I may with more truth and boldnesse unmaske the Hypocrite, pull off the visard from the Mountebanke in Religion, shem you Christianity in her owne face and feature, without the whoredomes either of Art or Falsehood, the gildings and overlayings of Dissimulation and Imposture, tell you who are selected Souldiers for the Lords Battell, and who Volunteers for the service of the Enemy, what they are that march under the Ensignes of the Spirit, and what these under the colours of the Flesh, and all this in a Caro concupiscit adversus Spiritum, The Flesh lusteth against the Spirit, and the Spirit lusteth against the Flesh; of which briefly, and as my custome is, bluntly, in a few broken Meditations, such as I could solder and piece up from the remainders of a more involv'd and laborious discourse: And now Caro-concupiscit, The Flesh lusteth.
— Humphrey Sydenham, Sermons upon solemne occasions preached in severall auditories, 1637