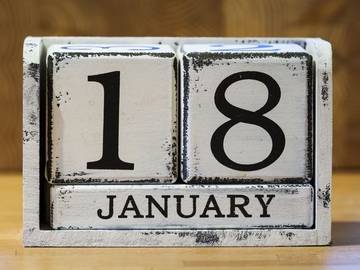 Surprising no one, politics drove pretty much all of this week's conversation.

Before we delve into the messy realm of U.S. politics, swollen as it is with rancor and acrimony, you may be relieved to know that the British dustup over Brexit caused at least one word to draw considerable attention last week. Backstop was on the minds of many as the political situation in the United Kingdom continued to elude resolution.

Much of the stated opposition to Prime Minister Theresa May’s divorce deal with the European Union centered on the “backstop.” The provision was designed to prevent the reintroduction of border controls between Northern Ireland, which is part of the U.K., and the Republic of Ireland, a member of the EU. After Brexit, the border will be the U.K.’s only land frontier with the EU.
— Danica Kirka and Jill Lawless, The Washington Post, 15 Jan. 2019

The sense of backstop employed here is “something or someone that provides dependable support or protection against failure or loss.” This figurative meaning is one of the more recent ones for this word; it has been in use since the early 19th century, and was first used for a player in games such as cricket (“a player, such as the catcher, positioned behind the batter”).

The word spread was used in a large number of articles, in reference to the assortment of fast-food items offered to the Clemson University football team at their celebratory dinner at the White House.

Many people, possibly spurred by the seeming incongruity of applying a word commonly understood to mean “a sumptuous meal, a feast” to mass-produced hamburgers, took to the dictionary to look up this word. Spread has been in English use since the 13th century, first as a verb and later as a noun. The “sumptuous meal” sense of the word has been in use for about 200 years.

An article in CNN on the government shutdown sent many people scurrying to the dictionary to brush up on their Latin, in particular the phrase deus ex machina.

So ... our elected leaders have reached the point where they are semi-openly acknowledging that they are entirely powerless to reopen the government and need a deus ex machina -- people outraged at airport lines -- in order to have any hope of returning things to “normal.”
— Chris Cillizza, CNN (cnn.com), 16 Jan. 2019

The phrase has two possible meanings: “a person or thing (as in fiction or drama) that appears or is introduced suddenly and unexpectedly and provides a contrived solution to an apparently insoluble difficulty,” or “a god introduced by means of a crane in ancient Greek and Roman drama to decide the final outcome.” The second of these definitions speaks to the roots of the phrase; it came into English from New Latin (“a god from a machine”), which is a translation of the Greek theos ek mēchanēs.

Prerogative had a spike in lookups, after President Trump announced that he was postponing the upcoming trip of Speaker of the House Nancy Pelosi; Trump wrote “Obviously, if you would like to make your journey by flying commercial, that would certainly be your prerogative.”

We define prerogative as “an exclusive or special right, power, or privilege," such as applies to “one belonging to an office or an official body,” “one belonging to a person, group, or class of individuals,” or “one possessed by a nation as an attribute of sovereignty." The word comes from Latin; in ancient Rome a praerogativa was the word for a group in a legal assembly that was chosen to vote first.

Our Antedating of the Week: sophomoric

For our antedating of the week we turn to sophomoric, which may be defined as either “conceited and overconfident of knowledge but poorly informed and immature,” or “lacking in maturity, taste, or judgment.” Sophomoric attracted attention after Senator Lindsey Graham used the word in a tweet regarding the contretemps between the Speaker and the President.

One sophomoric response does not deserve another. Speaker Pelosi’s threat to cancel the State of the Union is very irresponsible and blatantly political.

Our earlier evidence for this word had previously come in 1813; recent findings show it in use at least as far back as 1808.

We now see the master who chained down our understandings, or opened a well defined and luminous path, through fastnesses, wilds and marshes—his sceptre shivered in his hand, and himself, valiantly stalking in sophomoric fustian.
— The Balance (Albany, NY), 25 Oct. 1808