Some of the words that defined the week ending February 19, 2021

A large winter storm last week brought snow, ice, and temperatures far colder than usual to much of the United States. Texas, in particular, was adversely affected by the weather, and millions of the state’s residents found themselves without electricity, heat, and water. Debacle was a word found in much of the news coverage of the event.

When debacle first came into English in the beginning of the 19th century it had a somewhat different meaning, “a tumultuous breakup of ice in a river” (the word comes from the French débâcler, meaning “to clear”). In modern use debacle typically is used to mean “a great disaster” or “a complete failure.” 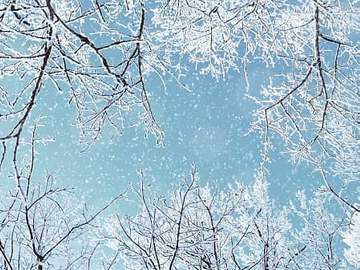 Find ways to help those in Texas here.

Pat Toomey, senator from Pennsylvania, voted recently to convict Donald Trump of having incited a riot in Washington D.C.; some fellow Republicans in his home state found this vote objectionable, and as a result the word conscience found itself in the news.

Conscience comes from the Latin conscire, a word that counts among its meanings that of “to be conscious of guilt.” When looking at this sort of origin it is not surprising that most of the meanings of conscience are concerned with some sort of moral judgment (such as “sensitive regard for fairness or justice,” “the part of the superego in psychoanalysis that transmits commands and admonitions to the ego,” and “conformity to what one considers to be correct, right, or morally good ”).

Donald Trump wrote some angry words about Mitch McConnell, and as a result one of the three pejorative adjectives he used spiked in lookups.

"Mitch is a dour, sullen, and unsmiling political hack," said Mr Trump, "and if Republican Senators are going to stay with him, they will not win again.”
— BBC News, 17 Feb. 2021

Dour is not a happy word; it may mean “stern,” “obstinate,” or “gloomy.” It should not be confused with its homophone dower, which means “the part of or interest in the real estate of a deceased spouse given by law to the surviving spouse during the surviving spouse's life.”

Andrew Cuomo, Governor of New York, has faced increasing criticism for his administration’s transparency (or lack thereof) on the number of Covid-related deaths in nursing homes. One of Cuomo’s critics last week alleged that the governor has threatened to destroy him.

“He goes off about how I hadn’t seen his wrath and anger, that he would destroy me and he would go out tomorrow and start telling how bad of a person I am and I would be finished and how he had bit his tongue about me for months,” Mr. Kim said.
— Luis Ferré-Sadurní and Jesse McKinley, The New York Times, 17 Feb. 2021

Destroy has many shades of meaning; the one most applicable to the conversation recounted by Mr. Kim is “ to deprive of position, prestige, and reputation and of the power to oppose or offer resistance; reduce to political, financial, or professional impotence or ruin; to defeat and discredit fully.”

Touchdown was much in the news on Thursday, after NASA managed to successfully achieve just this, in placing the rover Perseverance on the surface of Mars.

Touchdown confirmed. The #CountdownToMars is complete, but the mission is just beginning. pic.twitter.com/UvOyXQhhN9

Touchdown, as a noun, initially was a sporting term, meaning “the act of touching a football to the ground behind an opponent's goal” (this use dates from the middle of the 19th century for rugby, and began to be used in American football some 20 years later). The sense meaning “the act or moment of touching down (as with an airplane or spacecraft)” came into use in the 1930s.

Kerfuffle, a word people love to love, spiked in lookups last weekend after the Prime Minister of the United Kingdom used it in describing Donald Trump’s recent impeachment.

In an interview with US television on Sunday, Boris Johnson characterised Donald Trump’s impeachment and acquittal on a charge of inciting insurrection against his own government as “toings and froings and all the kerfuffle”.
— Martin Pengelly, The Guardian (London, Eng.), 14 Feb. 2021

We define kerfuffle as “a disturbance or commotion typically caused by a dispute or conflict.” Although the word gained prominence in the mid-20th century, it was in very occasional use earlier. At the very beginning of the 20th century the word was used on a handful of occasions by Alice Perrin, a British novelist. Her novel The Stronger Claim (published in 1908) used a common variant of the word, kafuffle: “Suppose we had been two young bachelors from the regiment”—he winked at Selma—“and you had come home too soon! My!—what a kafuffle there would have been!” And two years later Perrin again used the word in her book The Charm: “Oh! What a kafuffle!” she said wearily, and left her chair to approach Irene’s bed.”

Our Antedating of the Week: ’shock jock’

Our antedating of the week is shock jock, defined as “a radio personality noted for provocative or inflammatory commentary.” Our earliest known use had previously been from 1986; recent findings show that the word was in use the year prior.