Some of the words that defined the week of August 9, 2019 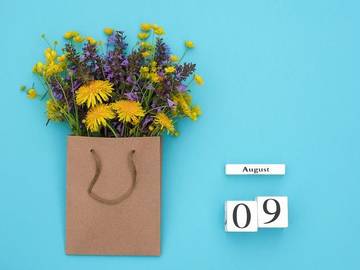 This was your week in words.

This past week saw the Internet captivated by a tweet which posed the question of how one should deal with having 30-50 feral hogs go through one’s backyard in 3-5 minutes (with one’s children playing in the aforementioned yard). We have no expertise in the matter of wildlife management, and so shall refrain from offering suggestions. What we can offer, however, is information on feral.

This word shares its origin with fierce; both come from the Latin ferus (“wild”). Among the meanings of feral are “of, relating to, or suggestive of a wild beast,” “not domesticated or cultivated,” and “having escaped from domestication and become wild.” There is another feral in English use, which is distinct from this “wild” sense (and is considerably more obscure); it means “causing death” or “of or relating to the dead; gloomy.” You could have a feral feral hog, if a wild member of the family Suidae managed to kill you, or just was feeling particularly gloomy about being locked out of the yard.

A mass shooting in El Paso, Texas (one of two this week) focused attention on a number of words, including manifesto and screed. Manifesto (“a written statement declaring publicly the intentions, motives, or views of its issuer”) and screed (“a ranting piece of writing”) were both applied to online postings left by the El Paso shooter prior to his assault.

Authorities are investigating a white nationalist “manifesto” posted on the far-right message board 8chan in connection with the suspect in Saturday’s mass shooting in the Texas border city of El Paso, which left 22 people dead.
— Lauren Aratani, The Guardian (London, Eng.), 5 Aug. 2019

A short screed posted online before the attack that appears to have been written by the alleged shooter includes language mirroring Trump’s own rhetoric on an “invasion” of migrants.
— Philip Bump, The Washington Post, 5 Aug. 2019

Manifesto may be traced to the Latin noun for “hand” (manus), and -festus, a combining form related to the Latin adjective infestus (“hostile”). Screed, which can also mean “a lengthy discourse” or “an informal piece of writing (such as a personal letter),” comes from the Middle English word screde (“fragment”).

The manifesto/screed left online by the shooter initially caused white supremacist to spike in lookups, although assertions made throughout the rest of the week that this was a fitting descriptor of President Trump caused it to remain high in lookups.

Senator Elizabeth Warren of Massachusetts said on Wednesday night that she believed President Trump was a white supremacist, broadly accusing him of dividing Americans along racial lines and providing direct and tacit support to those who believe white people are superior to other races.
— Thomas Kaplan, The New York Times, 8 Aug. 2019

We define white supremacist as “a person who believes that the white race is inherently superior to other races and that white people should have control over people of other races.” If you are interested in the semantic distinctions between white supremacists and white nationalists we have written about this here.

For the second time in recent weeks television host Tucker Carlson had a hand in a word spiking in lookups; this time due to his assertion that the notion that white supremacy in America was a problem was in fact a hoax.

Facing mounting controversy for declaring the very real problem of white supremacy in America to be a "hoax," Tucker Carlson announced at the end of his Wednesday night Fox News show that he will be taking a vacation.
— Oliver Darcy, CNN Business (cnn.com), 8 Aug. 2019

Hoax, when used as a noun, may be defined either as “an act intended to trick or dupe” or “something accepted or established by fraud or fabrication.” The word is thought to be a contraction hocus, and came into use around the beginning of the 19th century.

We were promised Roast Beef with an archness that seemed to hint the gratification it would afford us; however it was only the hoax of our lively female-waiter, as none came.
— The Monthly Visitor (London, Eng.), Jan. 1803

Our Antedating of the Week: 'dipstick'

Our antedating of the week is dipstick, which may be defined as “a graduated rod for indicating depth (as of oil in a crankcase),” “a nitwit,” or several other ways. Everyone knows at least one or two dipsticks, and it is always nice to have another word for describing such people. The “graduated rod” sense of the word is the earliest meaning; our earliest record had previously come in 1927, but recent findings have pushed this date back to the first half of the 19th century.

Mr. Burke himself was next examined, and stated, that he went to the malting on the day above-named, accompanied by the last witness, when he found the couch-frame very compressed, and he could not get his dip-stick down to the bottom without much force; he took the gauge in 12 places, and found it the same as stated by the last witness, 28 1-10ths; this was between ten and eleven; that he called and told the maltster it was evidently tight and compressed, desiring him to throw it out, which he refused to do.
— Chelmsford Chronicle (Chelmsford, Eng.), 20 Feb. 1846