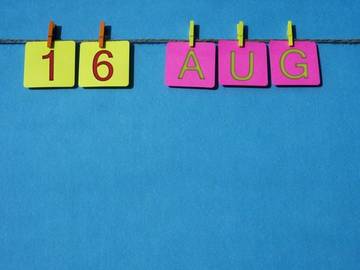 There's a little something for everybody in this week's words.

Quinquagenary was not a word in the news recently, although it could have been, had it not been so obscure. This week saw the beginning of the 50th anniversary of Woodstock, the legendary music festival which took place in upstate New York; quinquagenary means “a fiftieth anniversary.” There are other words which carry the same 50 year meaning, such as jubilee and semicentennial, but none have the imposing bulk of quinquagenary.

Much of the Internet was abuzz with a curious mixture of trepidation, anticipation, and a delightful frisson of disgust after news broke that Four Loko would soon be releasing a new drink.

Four Loko yesterday announced it is introducing its own hard seltzer that clocks in at 14% alcohol by volume.
— Kate Bernot, The Takeout (thetakeout.com), 14 Aug. 2019

We will refrain from passing judgment on the merits of this beverage, and will even withhold our recommendations for whether you would be better off pairing your Four Loko with a membrillo or a nice Brillo pad. We will, however, point out that Four Loko Hard Seltzer is a nicely mixed blend of words: there are two from Old English (four and hard), one from German (seltzer, a modification of German Selterser (Wasser), “water of Selters”), and one, presumably, from Spanish (loco, “crazy”).

One of English's hardest-working and least-heralded words had a brief moment in the sun this week as The Ohio State University sought to make it official with its initial function word.

JUST IN: The Ohio State University has filed for a trademark application to the word “THE” with an intent to use on shirts and hats. First discovered by @JoshGerben. pic.twitter.com/hdN4AIdvOt

We have written more extensively about this matter here.

Greenland was written about more than it usually is this week, after the Wall Street Journal reported that Donald Trump had expressed interest in whether it might be purchased.

President Trump made his name on the world’s most famous island. Now he wants to buy the world’s biggest. https://t.co/GSOXri7lj3

Some two-thirds of Greenland lie within the Arctic Circle, meaning it is not really that green. The world’s largest island, it is a self-governing overseas administrative division of Denmark, and is reportedly not for sale.

The Statue of Liberty was much in the news last week, after Kenneth Cuccinelli, the acting director of United States Citizenship and Immigration Services provided an edit to the Emma Lazarus poem that adorns the statue’s base. Many found the edit to be in questionable taste.

“Would you also agree that Emma Lazarus’s words etched on the Statue of Liberty — ‘give me your tired, your poor’ — are also part of the American ethos?” Ms. Martin asked. “They certainly are,” Mr. Cuccinelli said, before adding words of his own: “Give me your tired and your poor who can stand on their own two feet, and who will not become a public charge.”
— Jacey Fortin, The New York Times, 14 Aug. 2019

The statue is also known as Liberty Enlightening the World, sculpted by Frédéric-Auguste Bartholdi, and was dedicated in 1886. Standing 305 feet, it depicts a woman holding a tablet and upraised torch, and was given to the U.S. by France, in commemoration of the friendship of the two countries. The Lazarus poem (titled The New Colossus) is found on a plaque on the pedestal of the statue. Statue of Liberty has an additional meaning, “an offensive football play in which a back raises an arm as if to throw a pass and the ball is taken from his hand by a teammate who runs behind him,” which comes from the comparison of the upraised passing arm of the passer to the torch-bearing arm of the statue.

Our Antedating of the Week: 'sucker punch'

For our antedating of the week we are looking at sucker punch, after MMA fighter Conor McGregor appeared to have utilized this type of blow in an incident caught on video.

Sucker punch functions both as a verb (“to punch (a person) suddenly without warning and often without apparent provocation”) and a noun, and our earliest record of the verb had previously come in 1964. This use has now been pushed back to 1930.

He loses a bout when he is “sucker-punched” by his opponent who tells him his shoe-lace is untied.
— Knoxville News Sentinel (Knoxville, TN), 3 Jul. 1930

The noun appears to have come several decades prior to the verb, at least in writing. Our earliest record for the punch itself comes at the end of the 19th century.

At times one saw the influence of Daly in the use of the left at close quarters and the effective high block for which made (sic) Fitz’s right look like a sucker punch.
— The Buffalo Review (Buffalo, NY), 12 Jun. 1899

This use of sucker punch, however, appears to be using the term in a now-obsolete sense, in which it describes a type of punch which may occur without subterfuge.

“They used to depend almost entirely on the right-hand swing, known in professional circles as “the university, or sucker punch,” and classified with the “old college try” in baseball.
— Don Skene, The New York Herald Tribune, 29 Mar. 1930

In other instances in the early 20th century it can be unclear whether the use of sucker punch is in reference to the “right hand swing” sense or to the “punch delivered without warning.”

He put up as pretty a boxing exhibition as was ever seen in San Francisco, only to be licked by a sucker punch.
— Oregon Journal (Portland, OR), 21 Mar. 1909

By 1910 the word was in use with a clear meaning of underhandedness.

Bronson all but knocked Packey out with his “horseshoe” punch in the opening round of that fight and McFarland has excused himself for his showing in that battle because he said he did not think a boxer of Bronson’s ability would resort to such a “sucker” punch. The result of the bout showed who was the sucker.
— Duluth News-Tribune (Duluth, MN), 7 Aug. 1910