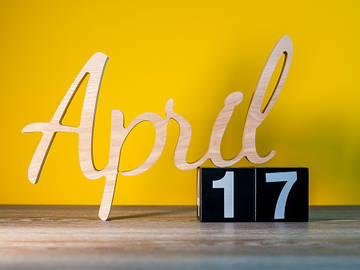 It's almost time for your weekend sweatpants.

Chyron was in the news last week, after CNN ran one of these which read “Angry Trump Turns Briefing Into Propaganda Session.”

It’s often said that Fox News and CNN almost report as if from alternate universes. But rarely has a moment so starkly underlined this dichotomy than President Donald Trump’s bizarre coronavirus press briefing did on Monday, when those network’s dueling chyrons presented viewers with a real-time black-vs.-white, up-vs.-down narrative on the president’s behavior and rhetoric.
— Reed Richardson, Mediaite (mediaite.com), 13 Apr. 2020

A chyron is a caption superimposed over usually the lower part of a video image (as during a news broadcast), and is named after the Chyron Corporation, an American manufacturer in the 1970's of a character-generating device that created such captions.

Nepotism has been in headlines and on the minds of many people over the past few weeks, often used in political contexts. The word came into English in the 17th century, following the English translation of Gregorio Leti's book Il Nepotismo di Roma, which was about the favoritism shown by Sixtus IV to members of his family especially his nephews). The word comes in part from nepote, a 17th-century variant of Italian nipote, meaning “nephew." If you’re simply looking for the word that means “of, relating to, or resembling a nephew” without any of the ‘corruption’ and ‘unfairly awarding a job to’ stuff, that’s nepotal.

The Governor of California, Gavin Newsom, used the word hypothecate in a press conference, leading a number of people to question whether this was a linguistic misstep.

Possible first use of "hypothecate" just now in a gubernatorial press conference, by @GavinNewsom as he outlines to road back from #COVID19 and the new realities of easing social distancing rules.

We offer two definitions for hypothecate: “to pledge as security without delivery of title or possession,” and as a synonym of hypothesize (“to make a hypothesis (an assumption or concession made for the sake of argument)).” The first of these definitions has been in use for of hundreds of years; the second one dates from the early 20th century. A number of usage guides feel that using hypothecate to mean hypothesize is in exceptionally poor taste. Our own usage guide does not take this position.

Mutiny also attracted considerable attention, after President Trump used the word in reference to a number of state governors.

Donald Trump accused governors of organising a "mutiny" against him over his vow to "soon" issue an order opening the country amid the coronavirus outbreak, but the president has yet to provide a shred of legal evidence he has the power to do so.
— John T. Bennett, The Independent (London, Eng.), 16 Apr. 2020

Mutiny came into English use in the 16th century from the now-obsolete mutine (“to rebel”), which in turn came from the Middle French mutin (“mutinous”). It can be either a noun or a verb; another verb form of the word is the archaic mutinize.

Our Antedating of the Week: 'hypothecate'

For our antedating of the week we are returning to hypothecate. Our earliest record of use for this word had previously come in 1681. Recent findings show that it was in use as far back as 1628, in records kept by the Privy Council of England (the Privy Council was a body of officials and dignitaries chosen by the British monarch as an advisory council to the Crown usually functioning through its committees).

For the true performance of all which and everie parte of the premises we thinke it fitt and reasonable that the said Sir Phillipp de Carterett shall bynd and pledge or hypothecate all his goods moveable and unmoveable and his lands, tenements and hereditaments, and especially the seigniorie or manor of Rossell, in that Isle of Jersey, aswell for himselfe as for his heires, executors administrators or assignes.
— The Privy Council of England, 12 Feb. 1628